With the Markers and the Colored Balloons 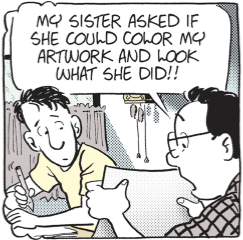 Girls are either natural-born comic book colorists or complete screw-ups.

Like most people who will read today’s strip, I never heard of Charlton Comics, so once again, off to Aunt Wikipedia I go to glean some knowledge about yet another one of Batty’s obscure cultural touchstones. Though young Phil dismisses them as “crummy,” Charlton’s history is rather more colorful that the one TB dreamed up for Batom Comics. Charlton Comics was started by an immigrant bricklayer in 1931, initially publishing magazines of popular song lyrics. His disregard for copyright laws landed the founder in jail for a year in 1934, where he met the attorney who would become his business partner. Charlton went legit in 1935, continuing (with permission) to publish lyric magazines. They began printing comics in 1944, and continued putting out superhero comics, along with romance, Western, horror, and science fiction titles through the silver and bronze ages.

57 responses to “With the Markers and the Colored Balloons”