Normally, a Funky Winkerbean reader would see today’s episode as one of those typical Sunday “filler” strips that has nothing to do with anything, but is just supposed to be lighthearted and fun.

But Tom Batiuk can’t resist tipping his heavy hand when he’s about to get serious.  I guess it’s his way of saying “Polish off those awards, boys, the Batiuk shelf is ready for ’em!”

So we see Adeela all happy and carefree, just before the mean ol’ USA comes crashing down on her, for no reason at all (I’m guessing; there could be a reason that will turn out to be incredibly stupid). Maybe she has a brother who’s bombed here and there, and she’s guilty by association.  Or it might be something we’ve never guessed (because it has never been shown.)  As I mentioned yesterday, whatever it is will be so inaccurate and poorly thought-out that it should win awards–just not the good kind.  The point is that Batiuk will make her life living hell, for no other reason than that’s the only kind of life available in this strip…and, for that, he should win an award.  A good award, too.  He thinks.

Seems odd that we had to go through nine years two weeks of talking about driver’s licenses to get here, but there you go in Batiukland.

And that’s all from me for now.  Thank you for your indulgence; I appreciate your comments and your insights, and I also appreciate those who read but do not comment.  And now, please welcome back reigning champion Epicus Doomus, who returns tomorrow.

Let’s have Peter Gabriel sing us out of here…

It’s the Month of Lestember!

This way to today’s real strip.

Link to today’s strip whenever it drops.

Today’s strip wasn’t available for preview. So instead enjoy my favorite comment from yesterday. 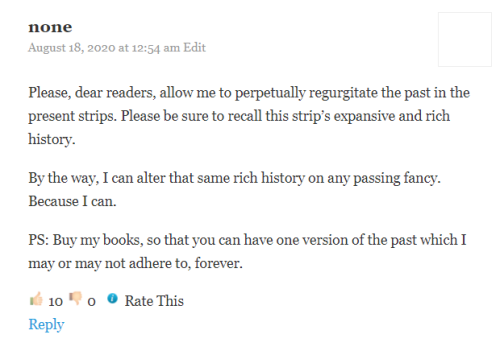 For a given value of save.

Les, I am going to explain this using short unequivocal statements, that way there is no way for your spotty memory and outsized ego to twist my words.

All you did was let her out the door first. That’s not a rescue, that is chivalry so lazy it’s a 50-50 shot if it was intentional.

Wally Winkerbean, that poor sad, pizza baking man has had his wife, his dignity, the childhood of his son, his sanity, and his agency as a character taken from him by Batiuk. Don’t you take one more damn thing from this strip’s number one whipping boy, who took all of that abuse, and survived, without a single legacy foundation to his name.

Les, I don’t know if you could ever lay claim to ‘saving Lisa’. Unlike some, I don’t have an encyclopedic knowledge of all the Act II drama. But you can’t even really take much credit for saving Marianne. You drove shotgun through a fire, and then carried a woman out the door who really should have been able to walk.

Why did I have to be given a Les arc? I would rather have a week of Dinkle.

So what have we got here? A couple of Batiuk’s trademark touches, starting with the sign that says HAIR MAKEUP on the inside of the door. The sign isn’t scotch taped; the tape is reserved for those reference photos of Lisa (how did Mason convince Les to part with those?), which would be more helpful maybe taped next to the mirror where the stylist could see them as she works.

And you’ve got spoken dialogue stretched out over panels that wouldn’t make sense in real time. “Doing makeup takes time…” (places wig cap on head, tucks Marianne’s hair completely out of sight under cap) “But if you take the time to do it right…” (takes wig from stand, places it over the cap on Marianne’s head, straightens and styles it until the desired Lisa effect is achieved) “…the results can be amazing!”

It gets more amazing tomorrow, folks, when billytheskink takes over the reins for the next couple weeks! Thank you as always for hanging with us. Stay Funky, y’all. 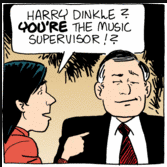 Well, I guess the dream is over, as Les pivots from a dream that kept him tossing to now note how he’s “thinking” about Frankie.    Maybe Batiuk doesn’t know the difference between dreaming and idle musing, but I’m pretty sure the latter is how he gets all his “ideas.”  But look at Cayla in panel one!  That’s the face of someone who is soaked in regret.  I’ve never seen weariness, God-am-I-sorry-I-asked, Please-Stop-Talking so well portrayed, so kudos to Ayers again.

And of course that’s Frankie in panel three.  What exactly is he going to do?  Demand that he be in the movie, or get money from the movie, because…reasons?  He has no relation to anyone still alive other than Dullard.  He certainly won’t have anything he can use as leverage over Les.   If the movie was “Dullard’s Story” he could, perhaps, claim to be an integral part but it isn’t so he can’t.  I am genuinely curious as to what kind of scheme he’s going to launch, despite the fact that Batiuk always disappoints.

I guess since the movie version seems to be moving along nicely, Batiuk needed a villain and, well, why not Frankie.  More Hollywood types whining that “Lisa’s Story” won’t play in China might have been too much repetition, even for Batiuk (hard as that is to believe).