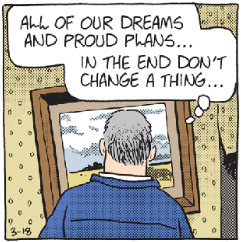 As far as Summer knows, the helmet that Maddie sketched for her has no special powers, aside from concealing Donna’s feminine gender from the boys. So how in the hell is she able to surmise that it’s really a “temporal phase shifter“? Maddie doesn’t know this, and Donna, who as a kid actually wore the thing, thinks that its phase-shifting abilities were just a figment of her fumes-addled imagination.

From back when Summer was actually a main character in the strip; the “sporto” that her father never was in his high school days. The Lady Scapegoats are seeded vs. Our Lady of the Cedars, who are to Westview’s girls’ basketball squad what Big Walnut Tech is to the football team. The girls are intimidated even before the game starts, and even the duo of former rivals Keisha and Summer are not enough to propel the Westview team to victory. This arc is notable for a couple of reasons: it’s one of the rare occasions when our protagonists do not succeed. It also contains one of my all time favorite Act III FW panels: the dejected Westview team seeing their reflection in the winners’ trophy.

Not sure why the OLC girls are still in uniform while Summer’s team has already changed into their street clothes. Nor why the winners are showing off a huge trophy when this is supposed to be a first round game.

For all his inconsistency and carelessness with continuity and canon: when Batiuk introduces a character from FW‘s distant past, it turns out that they were in fact part of the Act I cast. Though I read Funky Winkerbean back in the day (I was in marching band, how could I have not?), I was sure that Harley “the janitor” Davidson was a recent addition. So a big tip o’ the SoSF cap to ComicBookHarriet for pointing out that he’s been around since at least ’79. Four decades later, Lego-headed Summer has arrived at the custodian’s office. Sounds like she’s discovered yet another sordid detail from Teen Lisa’s journal… 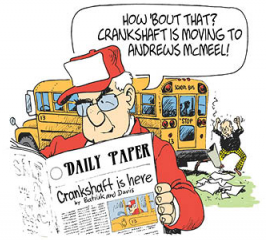 Interesting times when it comes to comics on the web! Yes, Crankshaft will continue into the new year, but Batiuk is jumping ship from Comics Kingdom/King Features Syndicate to GoComics/Andrews McMeel Syndication. Maybe that’s why Batiuk’s “editor” @teaberryblue hasn’t bothered to comment on Batty’s semiretirement (plus she/they are expecting a baby in December). Speaking of GoComics, looks like they’ve sorted the problems that knocked the site offline for the last couple of days. In other news, Comics Kingdom is “moving its commenting platform to OpenWeb” from Disqus; in the process discarding years’ worth of reader comments and hailing this as an upgrade.

Before I mock Summer and her new, sleek, angular, pointy appearance, a few words on the looming heat death of the Funkyverse. Obviously, without a daily strip, we will not be doing daily posts anymore after December 31. The site will remain alive for the foreseeable future, and we do hope we get new FW material to complain about. It’s not going to shutter right then and right there. But this is Batiuk we’re talking about here, so there’s just no way of knowing how it’ll actually go. He might drop 365 new FW strips on his blog on January 2, or he might do a feeble, one-off comic book cover eight months from now, or anything in-between. There will not be a re-read from the beginning, nor will we switch to “Crankshaft”. The daily strips are the engine that runs the whole thing and without those, it’ll never be the same. I’m not sure how or if sporadic posts will work, but that’s a bridge to cross at some later date.

From here on out, TFH and I will be sharing SoSF hosting duties. We are bandying around some ideas, and we very much want to give our beloved guest authors, both present and past, AT LEAST one more shot before the end, and see what happens after that. We likewise hope our faithful readers will remain entertained and engaged to the end, and we’ll do what we can to make that happen. For TFH and I, it marks the end of a long, long road. While Lord knows it wasn’t “hard work” by any means, it did require a daily commitment, and by “daily” I mean DAILY. FW runs literally every day, without fail, and we have always ensured that our loyal readers had a working link to the stupid strip, as well as a place to clown on it. We never missed a post, ever. We feel we owe it to ourselves and SoSF itself to ride it out to the very end, and savor it while we can. For me, SoSF is part writing exercise, part deranged personal vendetta, but mainly it’s been a labor of love. And I’ll be touching on that a lot more in the coming weeks.

So anyway, yeah, how about this new, aerodynamic, de-shaggified Summer, huh? I’m assuming that he brought her back upon learning that FW would be ending, as he didn’t seem to care too much for the last ten years. And, interestingly enough, I don’t care now! It’s just like Batiuk to be wasting time on Harley the janitor when he has barely six more weeks to go. The strip is jammed full of long-running characters, it’s winding down to the end, and he’s focused on Ruby and Harley.

And now, from the SoSF arc recap archives, a Great Moment In SoSF History:

Man, that was a real humdinger. Easily one of the most disturbing things I’ve ever seen. Les was furiously making out with himself, while a horrified Cayla and Susan looked on in revulsion. That was Cayla’s second hairdo, her “dreads” look she was sporting for a while. See, back then, Les was still only “seeing” Cayla, and Susan was still lurking around, shamelessly throwing herself at Les at every opportunity. Meanwhile, Les was still madly in love with Ghost Lisa, who was a constant presence back then, despite being dead, which happened in a story arc you may have heard about once or twice. When you look back on that period now, it’s amazing how action-packed it was compared to, say, 2020 or something.

That Was The Week That Wasn’t

Look at last Sunday’s strip, and then look at today’s strip.

It follows almost perfectly, doesn’t it? The story could have skipped this entire week. When it wasn’t redundant, it was confusing. Yesterday’s auction scenario now seems like a bizarre non-sequitir as we flip back to Summer’s insipid story. And next week apparently won’t be about either of these things.

I have to give today’s strip credit for moving the story along. The strip could have easily spent a month unpacking all the repetitive backstory Summer is hearing about today. Maybe her author arc won’t take as long as I thought. Batiuk probably just wants to get Summer her book tour, movie deal, and Nobel Peace Prize for Literature faster. But I’ll take the positive side effects where I can.

There’s still a lot to complain about, though. The intellectual bankruptcy of Summer’s stupid “oral history” is on full display. She asks her father’s friends about things that aren’t remotely history-worthy, and which she should already know anyway. Harley the janitor, a character so irrelevant that Linda and Kablichnik talk about him like he’s not there, gets his second mention in three days. Dinkle and the Eliminator get two panels each, even though the strip rehashes both stories constantly. No doubt this dross will be enough to make Summer the greatest historian since Pliny the Elder.

Is she interviewing people during the auction? I know I asked why she and Harry weren’t at this event, but isn’t this kind of rude? And how are you going to have a conversation while this is going on the background?

And with that, my guest hosting shift is up! This was one confusing fortnight in the Funkyverse. Though I had a blast, as always. My esteemed colleague BillyTheSkink is on deck.