How the Mighty Have Fall In.

Comic Book Harriet here! Ready to aim aim high and kick it off, hopefully without slipping and breaking a leg. I wanna thank our resident Spaceman Spiff for caring for us all over the last couple painful weeks. He brought us comforting sarcasm, and a barrel full of witty insights to dull the ache of Batiuk’s broken humor.

Today we get a real treat. The Passion of the Dead St Lisa movie bombed. So all of our comments about Funky Winkerbean gradually morphing into a Judge Parker, where characters are gifted success without merit, must have struck a nerve. Or Batiuk just finally remembered who he was, and is back to his old yanking-the-football ways.

But today is just PACKED with non sequiturs.

The only thing that confused me at first, but that I could make sense of after thinking about it, is that the release date of Lisa’s Story got pushed back. The movie just wrapped a few months ago, so it didn’t have any time to sit on the shelf mostly finished ala No Time to Die or Wonder Woman 1984. But then I remembered that movies get release dates well before they are finished, or have even started filming. And the great LA Firedemic of the vaguely defined ‘last year’ apparently shut down movie production long enough for Marianne Winters to be treated for early stage breast cancer. So yeah, the release date would have been pushed back significantly.

And it is an accurate and believable rendering of what did happen to a bunch of movies in the last couple years. There’s a whole Wikipedia page dedicated to the movies, cancelled, delayed, suspended, and/or dumped to streaming because of the pandemic. I’m actually surprised Batty didn’t decide to go topical-to-the-max and have it released directly to PicFlicks or Hula or whatever the Funkyverse equivalent of a streaming service would be. But apparently it was released in theatres.

And that is what is confusing me. There is no way Les and CauCayla would be learning about the movie bombing from an EMAIL from MASONEE. They went to a wrap party, but didn’t go to the premiere? They didn’t bother to check Box Office Mojo, or Rotten Tomatoes to see how the movie was being received critically or financially?

Les knows what it’s like to drop an anvil in a lake?

It that a popular idiom? I didn’t really know. So I went to grandpa Google and did a phrase search.

It really isn’t that common. Only four pages of results. I found it used a couple times in news articles because Judge Napolitano said it about Russiagate. A really sad blog about a sick kid. A few links to some fanfictions on wattpad…

And then things got weird.

What does this mean? What does any of this mean? Is it poorly translated from a language with ideogrammic elements? Is it some kind of secret code? Some kind of communication between hidden agents among us? It Funky Winkerbean PART of whatever this is? When Tom Batiuk ended today’s strip with “an anvil in a lake,” was he sending a message, recognized only by the few, that now, at last, was the time?

If you’re interested to see what dropping an anvil in a lake looks like, may I suggest this video. Where two Finnish people speaking nearly unintelligible English drop a red hot anvil into a lake and film it, just because, why not? Why not do that? Why not watch that? It makes a lot more sense than Funky Winkerbean most days.

I think the original intent here was that Mason would say the production survived various disasters, and Les’ remark was meant to categorize his cameo among said disasters. It’s typical of this strip’s style of “humor,” which is either self-depreciation or a dreadful pun. It’s also typical in that it turns real life suffering into a moment for a horrible person (Les, in this case) to smirk about how he sure suffered too.

But the way Mason’s sentence is built, it sure looks like Les is claiming his cameo is “stellar work.” In which case, ego much, douchebag? Your cameo took take after take, frustrated and angered everyone involved, and actually drove up the budget.

If that’s not the case, then once again Tom Batiuk is taking overweening pride in that which does not exist: his writing ability. He could have taken an extra five minutes and constructed Mason’s dialogue to fix the “joke.” Conversely, I suppose his editors could have fixed it for him, but they’re too busy having a picnic with Bigfoot and Mothman.

I spent an entire week working really hard to transmit my enthusiasm for how wonderfully dumb the Phil Holt resurrection arc was; and THIS is how I’ve been rewarded.

Well, jokes on HIM.

So what I’ll say about today is that I really like the porch swing in this strip. I like how it shows up off and on as a gathering place. It gives the strip visual continuity that rewards long time readers, but as far as I remember it doesn’t have the same verbal attention drawn to it by the characters as other locations like Montoni’s. It’s 100% better than that stupid bench that gets talked about all the time by…

Cutting it short today so I don’t mess up again. Until tomorrow folks. 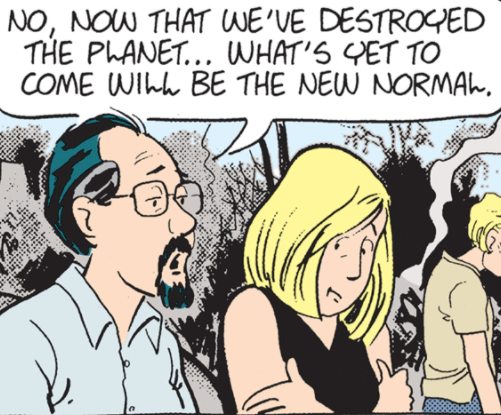 Wake Me Up When Lestember Ends

I’ll tread lightly here, in case someone’s personally experienced the aftermath of a wildfire. It does not look like fun. Batiuk hasn’t treated us to any reference photos of the hot zone, so I’m assuming that BatAyers queried Grandpa Google for some pics. Of 1945 Dresden. Or that Twilight Zone episode with Burgess Meredith.

Is there any character in this strip as thick-skulled as Mindy? She’s been standing outside the Bedbug Hotel with Pete long enough for Masone to drive from the Channel Island Harbor Marina (The nearest marina north along the coast from Malibu) to, judging by the view, the Hollywood foothills.

I know Comics Curmudgeon has been going nuts trying to parse out the geography of this arc, but here’s my take on it:

So, of course, given this map, it was entirely reasonable for Mindy and Pete to stand and wait for the minimum of two hours it would take Masone’s Starbuckmobile to drive BACK THROUGH THE FIRE to pick them up after dropping off Marianne and Les.

Only for Mindy to then remind her friends that her dad was hiking in Griffith Park.

Pete is smiling in relief in panel one, and suddenly worried in panel two. So unless he has the attention span of a goldfish, Mindy is only bringing this up now. And she seems at a complete loss as to what to do next.  So she’s going to let her fiancee and his pal decide if and how they should alert emergency personnel.  Or is she expecting them to go charging through the brushfire themselves?

Truly, dumb as a box of sponges. Because a box of rocks at least has some weight.