Looks like they were going to see some weird foreign film. Anyhow, today we see a desperate and frightened Adeela reach out to the only person who could possibly help…Wally. Yep, this should end well.

Why is Rachel smirking at Buddy like that? She’s a real odd duck, that one. And check out Buddy, it’s like he KNOWS there’s trouble. What a good boy.

At first glance I was like “whoa, Wally’s cell phone vibration mode is so powerful it’s torn completely through his suit jacket!”, but then I quickly realized it was just crappy art. It’s nice to know that our beloved Buddy still exists, as he hasn’t been seen in a while, but as usual BatYap gives him absolutely nothing to do. Free Buddy!

So they decided to skip Montoni’s and go to that stinky old decrepit movie house instead? Or will they hit Montoni’s after? I think we all know the answer to that question. I wonder what they were going to see before Adeela ruined Date Night again?

“Honey? “Doctor Obvious Versus The Time Gargoyles” is playing at The Valentine tonight! It’s a sci-fi musical from 1947 starring Wallace Beery! Can we go? Can we? Huh?”

Well, with today’s strip, Wally has officially beaten Summer across the Kent State graduation stage. And so has Buddy. And Kay Kyser too. Sheesh…

Also, be sure to check the throw-away panels today for a rare glimpse at Becky’s left arm back when it was still attached.

Thanks for reading my two weeks covering TB’s flotsam. SOSF hall-of-famer and hall-of-namer beckoningchasm will take the helm tomorrow.

He’s Smirking Because He’s Got Speakerphone On, And Likes Humiliating His Daughter

So apparently Rana can’t speak for herself, and Wally has to clear this with her mom, because she’s eight years old and not a grad student.  Wait, that’s not right.

I mean, why would Becky object?  It’s the first time in like ten years Wally’s even been aware he has a daughter.  Becky’s got to seize that moment while she can.  And this will allow her and John to have a romantic Thanksgiving alone.  Who am I kidding, of course it would be the two of them and Crazy Harry.

And it’s one thing for an individual to say that they personally are putting on the “freshman fifteen” (grad school fifteen is just lame and continues the long Batiukian tradition of thinking just switching two words is enough to be hilarious).  It’s another thing for Becky to “joke” about this totally behind Rana’s back to her dad.  It just comes off like complaining about her getting fat, which is laughable, but totally in line with the general mean-spirited nature of Batiuk’s strips.

Pinned Up Sleeves-Banned in Afghanistan

“Yeah, believe it or not, things used to happen in my life, back in the day!  Now what passes for excitement in my life is the exciting tale of ‘Sitting a Table Away From A Muslim Woman!’.  Also, notice how I emphasized that she’s my adopted daughter, and not my real or ‘bio’ daughter.  In case you were wondering how a normal average American like me could have such a foreign looking daughter.  But yeah, we adopted her and that was pretty much the end of me taking an interest in her life, obviously.”

Wouldn’t you think this had already come up between Wally and Adeela?  Like, at the very least that he’d worked for an NGO in Afghanistan, and not just been there as a soldier?  I mean, I think she’d be interested to know that a member of Wally’s family was literally from her country.

You know Wally honestly used to be one of the characters in this strip I halfway liked, if only because he actually grew and developed through dealing with his PTSD and getting back into a normal life.  And damn if Batiuk hasn’t made him super unlikeable in a really short time.  At this rate I bet the next arc is going to reveal how Buddy (who looks like a totally different dog in this strip) is actually a raging anti-Semite.

The folks who bring you SoSF rely on Grandpa Google too: mainly to confirm a suspicion that ol’ TB has once again drawn inspiration from his tiny Ohio Universe. The black squirrel on the poster in panel 5 is another tipoff that we’re at Kent State. But KSU’s “Cultural Café” IRL isn’t a permanent dining facility: it’s a monthly series of events  “that seeks to educate and familiarize [students, faculty and staff] about the home countries of our international students.” There’s one this Tuesday. With the exception of Adeela and possibly that swarthy guy with the glasses in panel 1, this “café” doesn’t seem any more or less “cultural” than any other spot on campus. But wait! Who’s the gal with the light blue hijab wrapped around her elongated head? Well, since TB teased it in his blog (and Gerald Plourde reminded us in a comment yesterday) it’s not really spoiling the surprise to tell you it’s Wally and Becky’s adopted daughter Rana, who, like Wally, has been missing in action for years.

Veterans’ Day greetings to our readers, and respect and gratitude to our vets. Tune in tomorrow when newly minted guest author SpacemanSpiff85 takes over the helm!

Charles
November 7, 2018 at 8:36 pm
You mention Buddy’s mismatched legs, but failed to mention the ridiculous strap that’s chafing him just below his anus. When he’s not shitting on it he’d no doubt be dragging his ass along the ground because of its itchiness. There is no dog vest or harness in the world that fits like that.

I’m giving that comment from Charles a bump, because it’s funny, because we see that awkward strap again in today’s strip, and, well, because there’s really not a whole lot else to comment on. Either Wally gave up driving following that road rage incident back in ’09, or, with both working at Montoni’s, these two can only afford one car.

I liked this arc much better when these two were wary of each other to the point of antipathy. Their initial awkwardness and mistrust of one another has, almost in an instant, been replaced with gentle scatological humor and hijab hijinks. Of course, Wally has to take it too far and bring up the handshaking thing.

Programming notes: Saturday’s strip was not available for preview; look for a placeholder post after midnight EST. Also! On Monday we welcome our newest guest author!

Bill
October 27, 2018 at 10:56 am
Like everyone else in Westview, Wally has no empathy. He could take his jacket off (since he’s wearing a T-shirt underneath it) and ask Adeela if that helps in making her more comfortable so they can work on the project together. But that would require him removing his “I am a veteran who has suffered” clothing and since it’s all about him, that thought will never cross his mind. 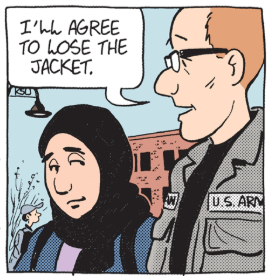 Well now! Could this be Wally’s big breakthrough? He’s finally ready to relinquish his good old M-65 jacket. Keep in mind it’s only been nine years since he popped up on Becky’s doorstep. Long enough for the jacket to fade from olive drab to the battleship gray we see today.

Getting a little too chummy there, Wally. You think all that cultural sensitivity training he got in the Army would have him avoid such vulgarity around Adeela, but he’s suddenly so relaxed he forgets himself. And rather than being offended, she’s actually amused by Wally’s coarse talk.

Since this story’s moving at such a slack pace, let’s pick apart the draughtsmanship. Ayers has always been a better cartoonist than Batiuk, But like Burchett (where’s he been, anyway?) I get the feeling he has to dumb down his style for Funky Winkerbean. Note the hirsute zombie in panel 1, and panel 2 Buddy’s deformed, mismatched legs.