(bat·ick·shuh·na·ry) A place to define words and phrases that, while never spoken by people in real life, are casually uttered by characters in Funky Winkerbean.

Readers may offer suggestions for new entries in the comments below.

*#@s
An instance of symbol swearing, used by Summer and Darin in a discussion of Summer’s life situation at the time. In context, the deleted expletive is “sucks”; what is unclear is why only four characters are used in place of five.

Bingo, Sherlock
A conflation of the exclamation “bingo” (“you are correct”) and “no shit, Sherlock” (“You have just stated an obvious fact”), used by Summer in reply to Darin when he correctly states the obvious fact that “everything [meaning her situation] *#@s.” 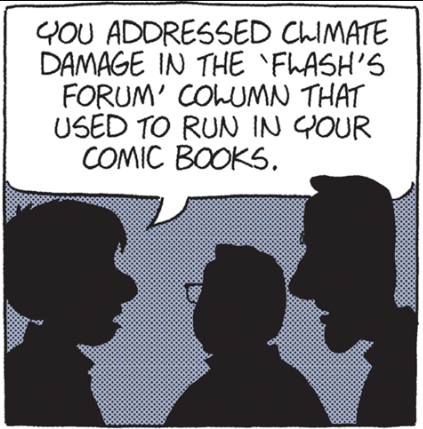 A phrase used by the staff of Atomik Komix, and practically nowhere in the real world, where most people would say “climate change.”

Coming Reunion, The:
In the days leading up to Westview High School Class of ’78’s 30th Reunion, the alumni almost always referred to it not as “the class reunion” or “our reunion” but as “the coming reunion”; perhaps to imbue the event with some sense of inevitable dread:

Especially me either
Phil Holt’s ghost’s affirmation of Jess’ “I can’t believe what that cover went for!”, as they watch Phil’s life’s work auctioned off for cancer money.

Grandpa Google
What people in the Funkiverse call the popular search engine; it’s where Pete first learns of negative fan reaction to his Amazing Mister Sponge story; Pete also credits “Grandpa” with leading him, Mason and Cindy to the New York City apartment of forgotten Starbuck Jones actor Cliff Anger. When Mindy meets Pete before the Starbuck Jones premiere at the Valentine, she has already queried “Grandpa” for Pete’s background info, and it’s how Darin learns that the name “Atomic Comics” has been used before Chester chose it for their comics startup.

I stand in line
Appears to be an expression of respect. The origin is uncertain, but this line is spoken by Crazy Harry to Funky at the end of the weird “Happiness Police” arc, and is used by Funky, accompanied by a humble bow, to give Darin props for his “breakfast pizza” idea.

In Situ Resource Utilization
Used euphemistically by Jim during the 2012 Westview Senior Trip to Washinton D.C. While ISRU does have a real-world application, Jim uses it to mean “hitting the mini bar in the hotel room”.

In the main
While not invented by Batiuk, this phrase meaning “for the most part” would probably never find its way into a romantic conversation; but leave it to Les to use it in the lead-up to his marriage proposal to Cayla.

It’s called writing:
This is not a line from the comic; it’s a quote from the Author Himself. “It’s called writing” is at once a mantra and manifesto for Batiuk, used to cover a multitude of crimes against continuity and plausibility. Shortly after the second time jump, on his blog Batiuk addressed questions by his fans regarding Wally’s status with the following: “…kick back, relax, and let the saga unfold tomorrow, and tomorrow and the tomorrow after that. It’s called writing (emphasis added).”

killer shark:
The “killer shark” surfaces twice in the Batiuktionary: after his car crash sends Funky back to the Westview of his teen years, he ruminates on the “killer-shark issues” that await him when he reaches adulthood. Frankie’s partner Lenny Gant tells him “you must have killer sharks swimming in your gene pool” as they discuss their evil scheme against Darin.

Lean-back listening list:
A “My-Tunes” playlist which might feature artists such as Emmylou Harris, but which should exclude presumably harder-rocking artists such as Robert Plant.

Le Chat Bleu:
(n, Fr.) aka, “Death Cat,” a vivid hallucination suffered by Les. This vision speaks to Les in times of crisis, demanding booze and taunting the hapless boob.

“Light this cracker”:
Spoken by a writer’s-blocked Les, April 19, 2013, in an attempt to psych himself up to start writing the Lisa’s Story screenplay. Would typically be spoken as “Let’s light this firecracker” in real life. Snarker Rick Brooks suggests that Les may be misquoting astronaut Alan Shepard’s  “…light this candle.”

Spoken by Harry Dinkle to wife Harriet at their 50th anniversary pizza party; used by Harry to mean “to keep something secret or hidden”. Used everywhere else in the known universe to mean “to deliberately underestimate or understate a cost.” (Suggested by Gyre)

Mega
Used by Linda to emphatically agree with Les’ observation that “things have changed,” and by actress Marianne Winters in a chat with Mason Jarr. Most humans would go with “Absolutely” or “You can say that again,” but I guess “mega” sounds “cooler.”

Miss All-Smart:
A female who presumes to possess knowledge that is unattainable to most, equivalent to the real-world expression “know-it-all”.

More issues than my car:
A non-sequitir used by Rachel to imply to Wally that he has more problems than he admits; it is unclear how “issues” relate to “car” unless it’s been established that said car has numerous problems. A more logical, real-world equivalent would be “more issues than National Geographic” or perhaps “more problems than a geometry textbook.”

Nearly…
One-word substitute for “almost but not quite.” Used by Summer when Les’ book is referred to as “Lucy’s Story” during his Today Show appearance; also spoken by Linda when Bull botches the delivery of Coach Stropp’s cremains into the end zone at the WHS football field.

Possessed of the inability to experience happiness without a sense of mortal dread; always seeing the dark side of any positive condition. This, of course, is a major theme of Acts II and III, but is identified as “Nordic” by Jessica, referring to prospective new father Darin, and by Les in re: his jogging partner Funky. Possibly a Midwestern or Ohio term, as Google searches for this usage yield no corroborating result.

Pedantic schoolmarm from a bitter hollow
Cory can’t bring himself to talk to Funky, because every time he does, Funky turns into one of these.

Rent a room:
An expression of disgust directed at two people sharing a public display of affection; equivalent to the real-world expression “get a room”. Update: in the May 4, 2011 strip, Keisha uses the correct phrase.

seasonal marker:
Though it sounds more like something Mr. Moore, Language Arts might say, this is actually a term coined by Funky to describe the ritual of setting up the outside dining tables in front of Montoni’s.

shanked:
1.) failed to or forgot to do: “I totally shanked that paper that was due in Mr. Moore’s class tomorrow,” Maddie
2.) messed up, mishandled: “I totally shanked the excuse,” Owen; “Just make sure you don’t shank it,” Darin to Pete, about his interview with the Starbuck Jones producers.

Soap drawer:
Where CTE-enfeebled Bull once put the Philadelphia Cream Cheese. Apparently the Bushkas have require an entire drawer in the bathroom to contain their soaps.

Solo Car Date:
Occurs when a teenage boy and girl travel in a motor vehicle; “solo” in the sense that each teen is without parental supervision; equivalent to the real-world expression “date”.

SPLANNG!
Sound made by a plastic reindeer when dropped from Montoni’s roof.

Straight-to-cell-phone:
Used by Ann Apple when discussing the possibility of Lisa’s Story being turned into “a real movie”. While movies can be viewed on “cell-phones”, the context implies a rank even lower than “straight to DVD”.

Sue [someone] back to a ball of dirt
To bring a massive lawsuit against someone, presumably for everything they’ve got. This is what Mason “Jarre” reckons the movie studio will do to whomever leaked the plot of Starbuck Jones online.

unification display:
A supposed marriage custom in which the bride and groom combine some personal items and put them on display at their wedding ceremony. Cory and Rocky’s “unification display” consisted of their merged comic book collections in a longbox.

vendo:
A vending machine, like they used to have installed at Westview High until the school board decided to offer the students “healthy choices” like tap water from the drinking fountain and mashed potatoes with gravy. First uttered by Cody and later on by Bernie and his nameless African-American friend.

Vodka and orange:
A cocktail consisting of liquor distilled from potatoes or grain, mixed with the juice of oranges and usually served over ice. Most bartenders and bar patrons in the real world refer to this cocktail as a screwdriver.

Wear/Wearing
To accept an undeserved compliment or misplaced credit. When Cliff mentions Cindy’s documentary Emmy win, she reminds him that her employer and videographer deserve some of the credit, “as much as I’d like to wear that around.” Les is flattered that Mason wants to portray him in Lisa’s Story, but Mason won’t “wear” that, as the suggestion was Cindy’s.

What brings?
Odd-sounding, casual verbal shorthand for “So, what brings you here?” It’s how Funky welcomes Cindy and Masone to Montoni’s; also used by Summer to greet Crazy Harry.

What on this globally warming green Earth…?:
An exclamation uttered by Principal Nate in the course of disciplining Susan and Les after a picture of them kissing appears on the internet. Used as a secular equivalent of “What on God’s green Earth…” while also allowing TB to express his belief in climate change.

world’s perfect genome, The:
Owen’s description of Cody’s ex-classmate and ex-pretend wife, blond Mallory Brooks. A typical male teen would be more likely to point out her attractiveness rather than her potential as breeding stock.

This site uses Akismet to reduce spam. Learn how your comment data is processed.