Turn And Face The Lame

Oh, Les. I think the book agent will know exactly what’s coming their way, when you call Ann Apple and tell her your directionless 29-year-old daughter wants to write a book.

The “make Summer a famous author” train is steaming ahead, folks. It’s Wednesday, and Les is already talking about getting an agent for his no-talent sprog. For someone who hates Hollywood people, he sure does act like one.

“Westview is changing?” How would Summer know? She’s been away for ten years. Having Summer make an occasional visit to foreshadow this observation – or anything at all about this complete rewriting of her personality and interests – would have been helpful.

The town in M. Night Shyamalan’s The Village is more receptive to change than Westview. These people all have the same high school social structure, the same friends, eat the same pizza, read the same comic books, mourn the same dead person, hate the Internet, and think The Phantom Empire is the greatest movie ever made. And don’t you dare suggest anything otherwise.

Summer says her book will be “an oral history, but also about social dynamics on a micro scale.” Did she change her major again in the middle of that sentence?

Summer Is The New Les

Were you looking forward to a light-hearted week with the Pizza Box Monster? Well, you’re not getting it. It’s time for Summer’s Story! We might as well start calling it that, because Tom Batiuk couldn’t telegraph his intentions any harder.

I realize that Batiuk uses Funky Winkerbean to indulge his frustration that he hasn’t won the praise he thinks he deserves, by lavishing it on his many self-insertion characters. But how many times does he need to do this? We’ve already seen Les and Lillian McKenzie get the deluxe treatment. The Atomik Komix team gets a ton of it as well. Several other characters, like Dinkle and Holly, have written books. Why do we need another story where someone becomes an author? Why does he need another story where someone becomes an author?

END_OF_DOCUMENT_TOKEN_TO_BE_REPLACED

Tagged as books no one will ever read, college, Falling leaves, jogging, Les, please make it stop, Summer, writing 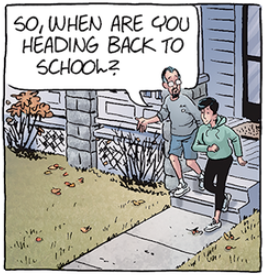 The Moore I See, the Les I Know

Y. Knott
October 14, 2022 at 11:19 pm
Someone…could cobble together a pretty good Sunday strip using the strips of just the 10th, 13th and 15th. Just put ’em together in that order, and you’ve actually got something.

Switching from spectacles to a monocle actually would not make Les any more pretentious.

Three days setting up Funky and Les taking on some teens in a game of tackle, then one day depicting actual play, followed by three days of Funky and Les walking away, bruised and bettered. Still, this goofy but harmless football arc actually was…well, pretty tolerable. Certainly, no one doesn’t like seeing Les in serious pain. And I’ll say it again, the art this week has been above par…BatAyers even went to the trouble of creating no fewer than eight distinct, diverse Anon-o-Teens. But how did we get from “Let’s fix that!” to “Can you fix your glasses?”

If the plan going in was “to show these kids how it’s done,” I guess that’s been accomplished, even if these kids clearly were not impressed. Of course, what this really was all about was righting a fifty-year-old wrong by Funky allowing Les to finally “feel more a part of things.”

I Love the Sound of Breaking Glass(es)

Banana Jr. 6000
October 14, 2022 at 11:19 am
On Monday, Funky said “Let’s fix that (meaning, throw Les the ball) and show these kids how it’s done!” They did exactly that. So why are they suddenly beaten down and laughed at? We’re left to guess. Batiuk basically makes you write the story for him. He thinks he’s being subtle by not telling you anything.

“Let’s fix that!” strikes me as a mantra for the latter half of Act III Funky Winkerbean. As this 50-year old comic strip approaches its twilight, Batiuk is busy retconning (and/or outright forgetting) established themes. Bull never really beat Les up; he was actually protecting his nerd friend from the real bullies. Yeah, the kids all picked on Wicked Wanda, but as adults they would be made to seek her forgiveness. END_OF_DOCUMENT_TOKEN_TO_BE_REPLACED