Diary of a Dead Housewife

Hey readers! As the Batiuk Retirement Watch continues, your friends here at SoSF are putting our heads together to figure out what happens to this blog after the 31st of December…look for updates soon. –TFH 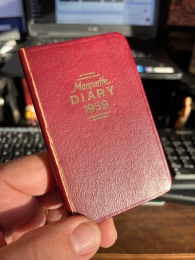 A couple years ago, my older sister showed me something interesting that she’d found among our late mother’s personal belongings: a number of pocket size “junior diaries,” one for each year, spanning a number of years from the early days of her marriage to my father through my own childhood years. While we were a little curious about what these little books might contain, my sis and I both agreed that we just wouldn’t feel comfortable reading through them. Though I did ask my sis if I could keep the one from my birth year.

Nobody connected to St. Lisa seems to have any such qualms about perusing her most private writing. Summer’s already read through Lisa’s account of being raped and impregnated by Frankie (and was even prepared to blackmail him by reading it on YouTube). When Les was struggling to write the Lisa’s Story screenplay, Cayla helpfully fetched Lisa’s journal from the bookshelf. Though she’s been dead for fifteen years, no FW character has dispensed more wisdom, between her journal (presumably journals; that same book probably wouldn’t contain entries from high school through her cancer battle unless she wrote really, really small) and her hours upon hours of video messages.

SIGH…not this asshole again. What’d I ever do to BatYam to deserve this? Oh, yeah…that’s right! Sigh.

You’d think that after thirty years Les would have settled into a routine of sorts, but apparently the trauma he suffered back in 1986 still resonates every September, like clockwork. Because high school forever defines us, you see, and back in high school Les was an anxiety-ridden simpering pud, so there you go. Kind of makes you wonder why he decided to spend his entire teaching career at the scene of the crime, so to speak, but logic has never been BatYam’s strong suit (guffaw). At least Cayla looks properly annoyed in panel two instead of looking on stupidly like she usually does. Sigh. You NEVER follow up a major Les arc with a Les “slice o’ life” arc…NEVER. You go with a lite & breezy Funky or Crazy Harry arc in that situation, not more Les.

ICYMI: So yesterday Logan was summoned to the office, only to return today to The Bleat’s studio with the rest of her peers (the “freshmen” we met in 2016 and hence should have graduated last June), and they’re all just back from a field trip? Th’ hell? Is this happening like five minutes later, or have days passed? Les is still wearing the yellow shirt, but that’s not a clue, since he wears a yellow shirt at least 85% of the time. Logan’s wearing a jacket that she didn’t have on yesterday, but then again, yesterday her top went from a crew neck to a turtleneck in the space of one panel. And today she wears the same color top but now it’s a v-neck. Logan: “Yeah, I almost would rather have been here!” Girl, you were here! Maybe that’s not Logan Church, but rather her heretofore unseen identical twin? Les, of course, is unaffected by any of this, as long as he can take as a “compliment” that being in his class is almost–almost–preferable to some shitty, five minute field trip to the principal’s office.

Welcome back from what I hope for you was a wonderful, long holiday weekend. Also back at work this Monday is Les Moore, after a weekend in Hollywood that started back in June. Les’ harrowing experience during the wildfires there have left him a little bit on edge: so triggered is he by the loud PA announcement that the sheaf of blank paper he was holding flies from his tiny hands. Easy to see why Mason wants to make a movie about this hero. Even Logan, the one being summoned by this booming voice, is more calm. Harder to gauge the reaction of the anono-kid in the red shirt, who is likely high AF and whose stage direction for this scene is “(looks on).” Tuesday: Logan pauses in the doorway and, without even getting Les’ Spinal Tap reference, blankly inquires of Mr. Moore, “Why don’t you just make ten louder and make ten be the top number and make that a little louder?”