Tag Archives: not how movies are made

Okay, we get it. China China China. The sole reason Lisa’s Story can’t be made is because the Chinese can’t appreciate true art. Why did we need a SECOND week to hammer this point home?  I would love if someone in this strip just came out and explained why the Chinese can’t appreciate the beauty of Lisa’s Story, but of course that would take effort and possibly be controversial.
“They Are Them” is just a terrible “parody” or whatever you want to call it of “This Is Us”. It sure sounds like a Cold War paranoia thriller, or a body-snatcher movie. It’s also pretty much nonsensical and something I don’t think anyone’s ever said. Also, Mason, This Is Us-sorry, They Are Them-is a TV show. Movies are different than TV shows. American Idol was huge. The same concept as a big budget movie would be terrible.
Why is Les at these meetings again? Mason is incapable of convincing anyone to make this movie, and Les is just sitting there quietly. And he’s probably getting paid for this, somehow.

Tagged as China, Hollywood, Les, Lisa's Story, Mason, not how movies are made 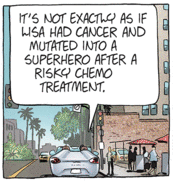 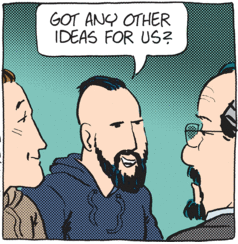 Even more disconcerting than their hoodies is Marc and Aaron’s penchant for completing each other’s sentences. So much to pick at in today’s strip. Has anyone else ever encountered this usage of “bank” as a verb meaning “to make money”? Must be some new lingo. Unlike “gangbusters,” a word that dates back to the Prohibition Era. And the SJ sequel Rise of the Zeton Warriors hasn’t come out yet? It was filmed concurrently with the first Starbuck Jones movie, which had its premiere over two years ago.

Hitorque
April 29, 2020 at 3:31 am
If Les is so hell-bent on “telling his story properly” and staying pure to his vision regardless of box office gross, why isn’t he seeking out the indie arthouse filmmakers…??

Right! If “everyone knows that China is where the money is, why is Mr. “I’ve Been To So Many Pitch Meetings I Can Predict What People Say” (h/t Banana Jr. 6000) wasting his time and everyone else’s with this pitch? I thought this was about making this movie “the right way“, not about making “bank.” Finally, somebody help me parse the punctuation in the second panel: “And that’s the problem…!” Ellipsis, exclamation point. I’m reading it as “And that’s the problemmmmmMMMMMM!“

Tagged as China, Hollywood, hoodie, Les, Mason, not how movies are made, Starbuck Jones, tiny hands

In A World Where Les Is A Hero…

Well, apparently Tom Batiuk saw “Stan and Ollie” last year, and liked it enough to have it still playing eleven years in the future.  (Your time jump, Batiuk, not mine.)  The fact that he liked it makes me think it isn’t worth seeing, but I’ll try not to let his taste color my viewing habits.  Who knows?

As for the rest of this, movies are made this way only in the most imbecilic fantasy wish-fulfillment worlds.  The real world is nothing like this; the idea that Mason’s cellphone picture would be digitally altered for the big screen is really dumb, unless he’s planning on making an entirely green-screen film like The Amazing Bulk.  Which wouldn’t surprise me in the least, given the “talent” that abounds in this strip (and behind it).

Preproduction for movies is generally nothing but drudgery, so it’s not a bad idea for Batiuk to make it seem somewhat interesting or even romantic.  What is a bad idea is having Les Moore in your story–that turns it right back into drudgery.

It does turn out that Mason has a hidden superpower–he can lean way over and not fall on his face.  Boy, wouldn’t that make a satisfying third panel?  Especially if his cellphone broke and a piece of the screen lodged directly into Les’ throat.

Now I’m all miffed that this didn’t happen.

Tagged as cement, drudgery, Hollywood, Les, Lisa's Story, Mason Jarre, New York, not how movies are made, not how the world works