But You Don’t Really Care for Music, Do Ya?

The Duck of Death
December 19, 2022 at 8:22 am
Guys. Guys, is he gonna have the whole freakin’ cast from both comics in this church and pan over the crowd while the ensemble sings the Hallelujah Chorus?

Is this how it’s all gonna end?

baeraad
December 22, 2022 at 1:52 am
I… think Batiuk thinks he’s going for a heartwarming all-the-lovable-goofballs-come-together-in-a-church-on-a-snowy-Christmas-night sort of thing for his ending…

Sourbelly
December 22, 2022 at 10:56 pm
Batdick has spent days establishing the fact that every Westview citizen who matters is driving to the Jazz Messiah Nonsense in dangerous weather. He has spent zero seconds explaining why.

As confounding and confusing as this strip has been over these final months…you can’t say that a lot of effort wasn’t put into today’s strip, the last-ever Sunday panel of Funky Winkerbean. Nearly seventy people (and one cat) are packed into St. Spires. I was even able to recognize most of them…but there are a couple head-scratchers. END_OF_DOCUMENT_TOKEN_TO_BE_REPLACED 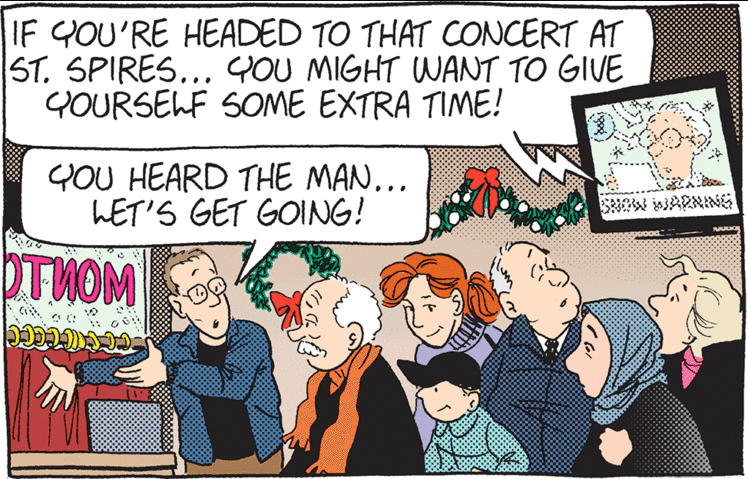 Let’s all take a deep breath, and go over today’s strip one panel at a time, shall we? There we see Funky and Holly, Wally and Rachel (with…her son? Robbie? Billy? Who knows?), Tony, and Adeela. But what are they doing in the pizzeria? Two months ago, we learned that Funky had decided to close the place and auction everything off. But in the spirit of the holidays, let’s be charitable, and suppose that the auction has concluded (would’ve liked to have seen some of that), but the lease runs through the end of the year. Since these folks, except that little kid, all work there, maybe they’re putting the last touches on closing up shop…though, that pink neon sign still hangs in the window, and the TV still hangs on the wall. And there are Christmas decorations on the wall that weren’t there when the auction began. Well then, I suppose they’ve gathered for one last nostalgic employee gathering… 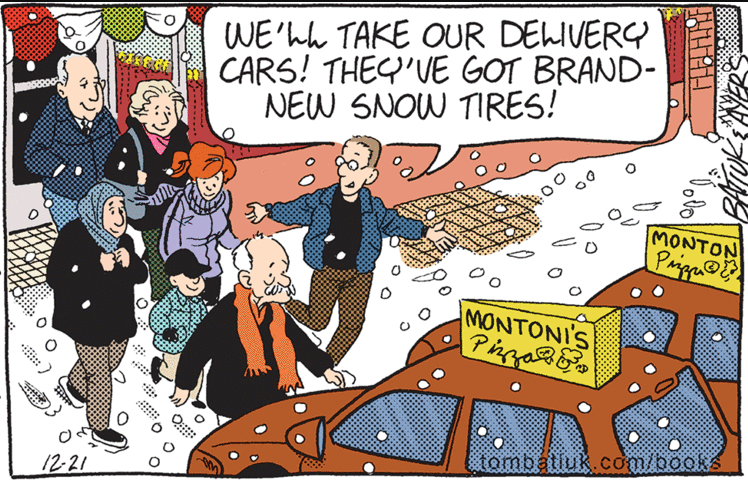 Then we get to panel two, and there’s the Montoni’s delivery fleet, parked right out in front. With “brand-new snow tires“! Of course this doesn’t make sense. And after all the other BS that Batty’s shoveled our way, particularly in the past month of strips, this incongruity comes as no surprise. You win, Mr. Batiuk. You’ve spent fifty years establishing these characters and their universe, and have certainly earned the right to throw logic and continuty down the toilet. Our nitpicking nation turns its beady eyes to you. Woo woo woo.

The Ladder of Divine Ascent

Here we have the quintessential “tell, don’t show” strip as everyone stands around marveling at a display of which we, of course, get barely a glimpse. Instead, we get to look at a quintet of imbeciles.

The real treat is panel three, where Tony speeds out of Montoni’s with a huge ladder, that was apparently just sitting around somewhere. Funky looks puzzled, Wally looks at the floor, and Adeela’s face is almost covered by a crucifix! There, that’ll show her! Based on what we can see, she’s either amused or about to throw up.

Holly’s face is that of sheer terror. Tony’s face seems to say “Ha ha, fooled you!” and I think Holly is about to yell to Funky, “Stop him! That grotesque old gnome is stealing our only ladder!“

But no, he’s just using one of the non-black Santa hats to plop onto the Montoni’s mascot. Giving us, in the process, another unneeded look at his fat ass. Something tells me that hat won’t survive the first gust that comes along, but at least someone actually tried to do something without bemoaning the oncoming failure.

I will say this: the street in that last panel is very well presented. It looks like it’s wet from freshly melted snow, so good on whoever was responsible for that detail.

And that’s it from me for this go-round. Tune in tomorrow when Epicus Doomus sits in the center seat. See you on the Funway!

Attack of the Clowns

“What should I do with this Santa hat? It’s red and kind of cheerful. Should I throw it in the trash?”

I hope K-2SO is suitable mortified to appear in Funky Winkerbean. I’m not sure why he’s making an appearance at all, other than Batiuk recounting his re-reading of Isaac Asimov’s “robot” stories. Which begs the question, why isn’t this Isaac from the Starbuck Jones comics? It’s one of Batiuk’s own creations, and he certainly hasn’t let up on the Starbuck Jones horn much since that was introduced. Maybe, as Red Letter Media would say, Batiuk is subverting our expectations.

Of course, K-2SO is not an Asimov robot, he’s a Star Wars droid. Who appeared in a movie, not in a comic book*, but I guess John’s shop is just an emporium for all kinds of pop culture ephemera. I wanted to say “garbage” but in the spirit of the season I’m being nice.

*Yes, there probably was a comic book adaptation of Rogue One, but considering how far Star War‘s fortunes have fallen since 2016, I doubt a lot of people are hunting it down…especially if the so-called “time jump” means that Rogue One opened fourteen years ago. And double yes, there are far older properties that are still celebrated, but I don’t think Rogue One is going to join that list. It’s a decent film in a franchise that has better entries. Funky Winkerbean should aspire so high.

First off, those are the blackest “Santa hats” I’ve ever seen. I guess the band is going to play at Santa’s wake.

But really, in what way is this a “long story”? Funky appears to be able to tell the entire thing in a single sentence. But they had to make coffee and settle in a booth so he could do this?

This makes me think Funky’s “That’s a long story” is his way of saying “Stop bothering me.” So Adeela went off and made coffee and came back and said “I made coffee” and Funky responded “Oh okay.”

And then he got bored and told the story in the dullest way possible, rather than trying to make it interesting. Hey, if his creator can’t do it, what chance does Funky have?