Candy and a Current Bun

I suppose Batiuk’s thought process was “Readers will want to know where the candy is. That’s vitally important for the strip to work.” Well, Tom, no it isn’t. People might wonder about the bowl of radioactive isotopes on the piano, but they’ll probably put it down to one of those things that Bizarro puts in his strip. (Looks like the isotopes have been hard at work, judging from the cactus-thing on the right.)

Also, does that mean that candy in other locations is fair game at any time? Although I bet they’re all those Circus Peanut things. Or mints that have been in a bowl so long they’ve become part of it.

I’m not sure how the system in panel two would work–the iPad doesn’t seem to be connected to the piano, and…ultimately, I don’t care. I bet Tom Batiuk doesn’t know how it works either. But we do get another sad Dinkle! Yeah!

And hey, someone remembered the photo corners this time.

A Picture is Worth a Dozen Words

Batiuk has long relied on the “photo album corners” visual cue when depicting flashbacks to past events. He uses that device once again in today’s strip to confusing effect. Are we seeing the photo that Holly is holding in her hands? Why is that photo talking? If Holly’s photos aren’t collected in a photo album, why does this one have photo album corners? There are other head-scratching details to unpack as well. There are apparently enough majorette pics to staple together and make a movie, yet there’s only one single photo of Holly as a baby…and she’s not even in it? I get the feeling too that Batty had an extra baton twirling joke, and decided to use it up in the middle panel. It really doesn’t have much to do with what’s being said in the panels surrounding it.

We don’t need no stinkin’ badges!

Three panels, three places, and no answers in today’s strip.

So Phil Holt created The Subterranean, demanded ownership of the property, didn’t get it, left in a Les-level huff… and then hated Flash for the rest of his life? Was it Flash that denied Phil ownership of The Subterranean? Should I submit this to CIDU? We’ve gone from classic TB “tell don’t show” to “tell, but not really”.

One assumes then that Phil took The Subterranean to Marvel, where the concept was reworked into Subterranea. The butterfly effect of this decision ultimately resulted in the greatest Spider-Man story in recorded history, so let us all be grateful for that.

Hey, we’re finally getting around to the reason behind Flash and Phil’s falling out in today’s strip and it’s… less than fascinating to say the least. Durwood, who asked Flash to elaborate on their split to kick this week off, appears to already know the answer to his own question anyways. So was the primary reason Durwood brought Phil up to Flash so he (and, by extension, TB) could humblebrag about selling Phil’s old comic book covers for the St. Lisa charity? I think that is a reasonable assumption.

I don’t know what to make of the fact that Flash is smiling as Durwood brings up the straw that broke the Holt-Freeman partnership camel’s back, so I won’t make anything of it much like how nothing has been made from this story arc’s rancid ingredients.

This really has been just a whole week of crap, hasn’t it? Start with the recurrent premise: Ruby regales Mindy with her story of life as The Only Woman Who Ever Worked In Comics (h/t batgirl‘s comment from yesterthread).

In fairness to Ruby, “woke culture” are two words that are hard to say together without making air quotes. She’s demonstrated herself to be pretty game when it comes to watching stag films with the guys every week, but Ruby does have boundaries: cross them and you’ll be physically assaulted. She’ll then channel that rage into her portrayal of Miss American socking…Hitler?!?  He’s been dead 76 years! Even if Ruby went into the comics industry straight out of high school, she’d have to be midway thru her nineties by now. Tune in next week when Ruby recollects her “King of the World” moment with Cliff Anger on the bow of that tramp steamer.

Gerard Plourde
May 26, 2021 at 10:50 am
Does anyone else think it’s weird that TomBa thinks adult male bonding behavior includes WEEKLY GROUP viewing of porn?…I can imagine guys getting together for drinks at the end of work…but I find it hard to believe that this would happen outside of some member of the group’s office bachelor party.

Hitorque
May 26, 2021 at 12:00 pm
I don’t get it either…. Teenagers and maybe college students is understandable, but grown-ass men in their 30s and older watching erotica all huddled together in a dark office seems creepy as hell… 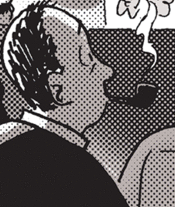 spacemanspiff85
May 24, 2021 at 11:48 am
There are few things in the world I’m less interested in than Tom Batiuk writing about the plight of women in the comics industry sixty or more years ago.

As a member of our very own “bullpen” here at SoSF, spacemanspiff85 knows not just the pain of reading Funky. Winkerbean. Every. Damn. Day. Periodically, Spiff is called upon to write something interesting about it to share with the rest of us. For two weeks, after which another SoSF guide host/guest author takes over. We limit our authors to two-week stints for the sake of their psychological well-being. Were that not the rule, I’d turn the helm back over to Comic Book Harriet, whose bailiwick these “Women in Comics” arcs have become. SoSF trauma protocol dictates that CBH must rest on the sidelines (while killing it as always in the comments), and it falls to me to get us through this arc.

As a male, I must tread lightly, but here goes: editor “Stogie” Butz’ “pretty good for a girl” remark barely qualifies as a microagression, given the times. Whatever midcentury decade Batiuk’s trying to recreate here (and it could be anywhere from the 1940’s through 60’s), calling a woman “girl” in the workplace wouldn’t be automatically out of line. He’s just busting her…chops, as would any cigar chomping, no-neck cranky boss.

Today’s strip marks the third straight day that Dinkle is doing his eyes-closed, head tilted back, mouth-agape, peacocking thing… which I think we can all agree is seven days too many. Hopefully we can also all agree that the poetic tire fire that is “I believe this is the first time a man’s crew-neck undershirt has been seen in the choir loft!” is a sentence that is just too perfectly execrable to exist. Yet it does exist.

Yes, we have here a call back here to Dinkle’s May 2017 trip to Belgium, where he was showered with unearned praise, given this unbearably punny-named medal, and stood in front of TB’s uncredited tracing of the legendary Hergé’s work. I’m not wordly enough to know if the Belgians hate us, but I can’t blame them if they do…

Today’s strip gives us our first glimpse at a young Batton Thomas… back when he had the hair of a newscaster, the jaw of Rob Riggle, and the neck of something that doesn’t have a neck. Quite a contrast to today’s sad-sack Batton, who looks like he could be Pete’s dad (he’s not, John Darling program director Reed Roberts is). Trading that plaid seersucker jacket for a blue Members Only was a good call, though.

So The Flash #123 inspired Batton Thomas (and, most definitely, one Thomas Batiuk as well) to become a cartoonist, eh? How, exactly did it do that? If we are lucky we’ll get that answer in 6-10 business days. Or just visit the official Funky Winkerbean blog, where TB writes more about The Flash than he does about his own creations… Haha, yeah, you all go do that. I’ll wait.

Link To The One Today

Ugh, this certainly doesn’t bode well for the rest of the week. When did they suddenly begin talking about the choir? I thought this was about the organ. And there’s no joke here, other than how this happened to Dinkle before back in 1977 or whatever. And that ain’t funny.

Instead of a silly hat that always covers his eyes, I believe Act III Dinkle should wear a silly hat that obscures his entire body AND his word balloons too. He’d be way more palatable that way. He’d still suck, of course, but at least we wouldn’t keep seeing proof of it.

This arc should be more like the movie “Hustle And Flow”. Dinkle would sit down at the organ and start playing a hot riff, then the church ladies would jump in and lay down a tight beat and it’d end with Dinkle in jail for beating the hell out of Les after discovering that Les threw his sheet music in the WHS urinal after promising Dinkle he’d get it to his publisher. I’d buy that anthology AND stand in line to get it signed, too.