That’s right, BatYam, it’s the readers who are wrong. This attitude sure explains an awful lot. “Crappy serialized stories that plod along for weeks on end and never go anywhere are what comic strip authors choose to publish!”…yep, they sure do. It’s one of American popular culture’s most enduring and vexing conundrums.

“Rapping Around”??? Oh…I get it. “Rapping” meant something else in those days. Way to date yourself there, Batton. Sigh. Obviously the gag here is how Batton was tackling these timely, topical issues way, way back in the 1970s, when everyone started giving a hoot and not polluting. And Batton is all wistful about it as he realizes that his “art” made no difference whatsoever. And it’s all very hilarious, in that patented unfunny way of his. I’d like to throw the whole lot of them in that river, preferably with cinder blocks chained to their ankles.

Why is this an annoying vertical strip? Panel one, the fake strip, panel two, word balloon one, panel three, word balloon two. How hard was that? Something about that pseudo-Funky font really irks me, too. “Rapping Around” my ass.

The Trilogy Of Tedium

It’s called a “tetralogy”, you nimrods. Or a “quadrilogy”, if you prefer. It took me all of three seconds to learn this. But BatYam felt he really needed to drive Flash Freeman’s general imbecility home, again, so here we are. It would appear that once again he’s done the impossible and discovered something even more tedious than that “Elemental Force” arc from a few months back, and that “something” is watching Flash and Phil talking to Batton about it. That BatHam, always pushing his artistic boundaries.

That “Elementals” arc was absolute hell to get through and I really hope we’re not revisiting that fiasco again, because I am totally out of sub-atomic particle puns. It really is remarkable how quickly Flash Freeman became one of my most despised FW characters, as he wasn’t even in the strip until a few years ago. And it was better that way. Marginally, yes, but nevertheless.

Shooty Now For The Future

Keen observation there, Boy Lisa. Insight like that must be why they keep him around, in spite of his overwhelming blandness. Not that it would have helped or anything, but it’d have been way more in character if Chester had said something like “find out what next’s year’s hottest titles will be so I can buy all the first editions” or something that was, you know, related to comic books in some way. Because he’s Chester Hagglemore, the man whose entire life revolves around comic books.

But instead he just had him say the most generic thing possible in that situation, rendering the strip (and the Chester character) totally pointless, instead of just mostly pointless. This is a really, really bad premise, even by FW’s lowly standards. Usually the premises are semi-believable and it’s the execution where they all go hopelessly awry, but this one is just complete dog shit. He couldn’t think of any other way to work some “Flash” gags into the strip? “I know! I’ll have Batton Thomas inexplicably use the Flash treadmill at Atomik Komix”…I mean that’s really out there, man. Half the strip takes place in a comic book store and a comic book factory, and this was the best he could do?

I have to assume that this gag would make sense to big “Flash” fans, but what good does that do me? Based on what I know thus far, Batton’s gym closed during the pandemic, so he wandered over to Atomik Komix HQ, where, as fate would have it, they had a treadmill he could use. And no one at AK seems to mind or finds this peculiar in any way. On the contrary, they actually seem fine with it, engaging in wry banter with Batton as opposed to saying something like “what the f*ck are you doing?” or something like that.

And if his gym closed due to the pandemic, is it wise for him to be wheezing all over a bunch of people (three of them elderly, no less) he doesn’t even really know? And what about the potential liability issues here? If Batton snaps a tibia or dies on that thing, the cops and lawyers will definitely be asking questions about AK’s incredibly lax security, and those questions won’t be wry.

Link To The Strip

Special thanks to TFH, and everyone else really, but especially him! Lucky me, I’m back just in time for the unholy alliance of Batton Thomas and Atomik Komix, perhaps the second or third most sickening development of 2022 so far. Les getting that Oscar is gonna be tough to top.

So this Batton guy just “started coming there”? He just showed up at random local businesses looking for gym equipment he could use? Did someone invite him? How did he even know about the treadmill? This was the only way a guy with fifty years of writing experience was able to work a character based on himself into the story? Why not just use “magic” next time? Would it really be that much more ridiculous?

Batton is in the strip all the time now, yet Batty is still explaining who he is, which means that either a) he thinks his readers are forgetful dullards or b) he has no confidence in the character and probably shouldn’t be using him at all. I’m kind of surprised that Batton doesn’t already work at AK, as everyone else even loosely associated with the comic book business (turns and glares at Mindy) does. He could write and illustrate “Apathy Man”, whose superpower is that everyone forgets interacting with him immediately. He could use that ability to solve crimes or save the planet or something, or he could just half-ass it and milk it for fifty years. Either or.

A Funky Thing Happened on the Way to Flash’s Forum

beckoningchasm
March 2, 2022 at 10:35 pm
When Pete says “You addressed climate change in that column” it sounds like either 1) the column only ran once and was sensibly discontinued, or 2) every single column that appeared was about climate change. Because that’s how that sentence reads.

But wait, BC, there’s a third option: reprint that eco-sermon from 1972 in every ish of their new comic. That wouldn’t be too preachy, would it? Many of you have pointed out that the Stan Lee “quote” was addressing pollution, not climate change. While both topics are of course related, climate change has only more recently been regarded as a threat. By characterizing it as “climate damage,” Pete’s making Flash and Stan sound like they were ahead of their time.

We Deserve No Pity

“[French director] Alain Resnais…was a student of American culture who had learned much of his English from comic books. He was a huge admirer of the Marvel Universe and of [Stan] Lee…Their first project was The Monster Maker, a pop-art parody about a frustrated movie producer who seeks creative and spiritual redemption by making a film about pollution. With gentle direction from Resnais, Lee wrote a full script…The Monster Maker‘s protagonist, Larry Morgan, is an apparent stand-in for Lee himself. Morgan produces schlocky horror pictures that make money and are popular with kids, but he can’t help but feel that he’s reached a dead end. He is despondent about his life and his job, and what he craves more than anything is recognition from an adult audience [emphasis added]. Through a series of story twists, Morgan embarks on a ‘serious’ film project to expose the evils of pollution. There’s some violence, a fire, and then a climactic montage sequence in which a monstrous wave of pollution descends upon New York City, choking the sky, the waterways, and the streets. The true horror, it is revealed in less than subtle fashion, is the accumulation of garbage that we so callously resign to landfills, mindless of the terrible price that we might pay in the future.

“The movie closes with a voice-over:

“…At one point in the movie, Larry Morgan tells his ex-wife, Catherine, about his new, meaningful work. She glows with pride: ‘Larry, you must have known how I always felt about those shallow horror films of yours. I always wondered how you could bring yourself to keep grinding out such juvenile, unintellectual pablum. But now, to think of you tackling a worthwhile theme like pollution—to think of you turning your back on commercialism in order to say something that must be said—Oh, Larry—I can’t tell you how thrilled—how proud of you I am.‘ Unlike Morgan, Lee wasn’t exactly turning his back on commercialism. He and Resnais sold The Monster Maker in 1971 for $25,000. The script gathered dust and was never made.”

Raphael, Jordan and Spurgeon, Tom. Stan Lee and the Rise and Fall of the American Comic Book. 2003 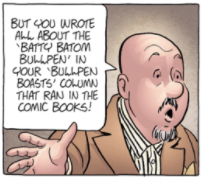 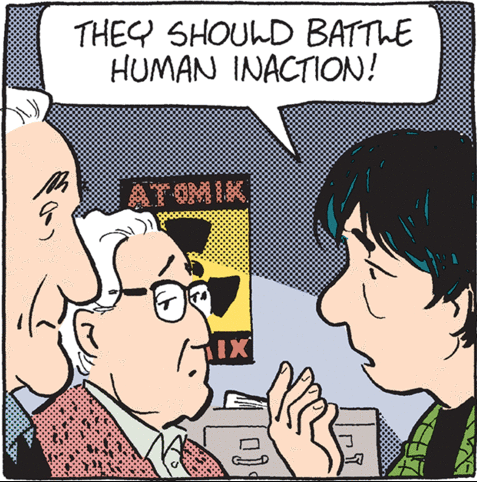