TB goes full on meta in today’s strip… could this be a preview of what we’ll see over the next few weeks? Is everything else from here on going to be bizarrely (and blandly) self-referential? Are we in for even more unnecessary acknowledgements that these characters all of a sudden know they are in a comic strip? I suppose we will have to wait and see, though the wait won’t be too long now.

Meta references can certainly work, but are not inherently interesting or funny, nor are they funny in the context of this strip and story arc, or in the context of TB’s real life partial retirement for that matter. What is funny, however, is that Ruby joined Atomik Komix over 3 years ago to much fanfare, specifically to draw Wayback Wendy I might add, and she’s peacing out after drawing the cover of issue #4! And we all thought Phil Holt was a slow worker…

And that’s a wrap for my latest and possibly last time blogging here at Son Of Stuck Funky. No goodbyes here, but I do want to thank some folks. Thank you to TFH and Epicus for running this place for the past 12 and a half years and for trusting me as a guest writer here over the past 8 years. Thanks to my fellow guest writers for keeping this site reliably humming for years and much thanks to all of you SOSFers for coming back and reading day after day in spite of my silly wonderings and regular typos. I’ve written over 500 of these things, believe it or not! But for me these posts are mostly a glorified header, the best content generally comes from you all in the comments. I can only hope that you have enjoyed reading some of my words even 1/100th as much as I have enjoyed being a part of this community.

And so, I will close this post the same way I wrote my entire first week of posts…

So does he feel even a slight bit of relief to find out that this apparent potential bridge jumper is merely a stranded motorist? Nope,  Crankshaft is pissed. This is what he gets for being a nice guy. For someone who’s having the “worst day of her life”, Susan’s demeanor has brightened until she’s as chipper as Crank is cranky.

J.J. O’Malley
October 20, 2022 at 12:49 am
Is tomorrow’s strip going to feature Ms. Smith saying to her would-be Clarence the Angel (Second Class), “Oh! You thought I was going to jump? No, I just stopped here because I have a flat tire!”?

Close enough, O’Malley, close enough. A flat tire can happen to anyone, though; a driver of today’s cars would have to be pretty damn hapless to run out of gas. Guess Susan’s still so distraught over having to say farewell to Les (and to her teaching job) to see the “low fuel” light through her tears.

This “Susancide” arc that wraps up tomorrow has been particularly pointless. Batiuk brings back from an eleven year absence a long running, albeit secondary, character who starred in one of his early prestige arcs. But we catch up with her here mere hours after we saw her last. Where is she now?

And where was Ed Crankshaft then? Susan split the scene in July 2011. Less than a year later, Les and Summer were training for their Kilimanjaro klimb when they spotted their old bus driver:

“How do you know that decrepit old man in the wheelchair is Crankshaft, Mr. All-Smart?” Because in ’09, Batiuk & Ayers gave us a week where Crankshaft becomes unstuck in time, flashing forward and back through his life.

Come to think of it, inserting Ed Crankshaft into this flashback gives Ayers an excuse to draw the character the he drew for thirty years: the classic Ed Crankshaft that everyone knows. Not Mindy’s feeble “Gramps,” or that Hector Salamanca lookalike that Rick Burchett turned him into. Even Batiuk himself never drew Crankshaft very well. Dan Davis draws the strip these days, and does a creditable job currently, but only Chuck Ayers could render Cranky’s contemptuous scowl in panel 3!

I Thought Of Quittin’ Baby, but My Heart Just Ain’t Gonna Buy It

So today’s what, Thursday? So two more days for this dramatic, life-and-death setup to take an appealing, wacky twist! Did you really think she was about to kill herself over Les Moore, old man? That douchey English teacher over at Westview? You’ve had him on your bus at some point, I’m sure. Yeah, that guy.

I was not so intrigued by Susan Smith’s reappearance yesterday, neither by today’s cameo by a…younger? Ed Crankshaft. Nope, what set these beady eyes to nitpicking was Ed’s peculiar POV in panel one. That angle and that distance just seem impossible on that narrow bridge. My curiosity compelled me to construct the scene from the opposite perspective:

Weird camera angles aside: so it looks like Batiuk’s gonna play the suicide card again, and for the second time on the same female character, and over the same leading man. Unbelievable. At least he knows better than to have Les come hastening after her to talk her down. Unless he’s about to leap out of Crankshaft’s bus. Speaking of old Ed, if indeed this strip is happening eleven years ago, he really went downhill between June 2011 and this cameo in June 2012! 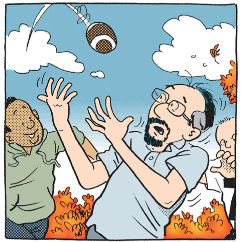 Link To Today’s On Time Strip

No, she passed away while playing racquetball, you clod. This one is rather grim and depressing, even by FW standards. They just refuse to let that poor old dead organist rest. Oh well, at least her death resulted in a humorous anecdote for everyone else, so her hundred and twenty years on this planet were well worth it. Maybe next week the pastor will die during a funeral service, with hilarious consequences of course.

I get this reference, because G and C are music notes, right? Sigh. It’s not Batiuk’s worst gag ever, but still, the old lady dying sort of takes the edge off, for lack of a better term. In a FW context it’s nothing but to an outsider I suppose it’d seem rather dark, which is probably one reason why hardly anyone reads it.