Am I My Mother-in-Law’s Keeper?

Yeah, Holly’s all smiles today, but all week she’s done nothing but kvetch about her mother leaving the house a mess and maxing out the DVR. Funky, meanwhile, is considering renovating the guest bathroom for the old gal. OK, he could have phrased it a little better, but Funky expresses genuine concern for Melinda. His attitude towards his mother-in-law has softened considerably in the year since Melinda decided to make her stay permanent, but it’s not enough to spare him the old side-eye from the missus.

Programming note: Saturday’s, Sunday’s, and Monday’s strips are all unavailable for preview. I’ll post placeholders, but you’ll have to hold your snark til midnight EST.

Proof that video technology in the Funkiverse has indeed progressed beyond those VHS tapes that everyone hoards and cherishes.  We haven’t even seen Miranda this week, but her trail of destruction extends to every room of the Winkerbean house. In the comments here yesterday, Epicus described Tuesday’s zoomed in computer monitor gag “relatable,” and I find myself relating to today’s. Some years back, my wife’s grandmother, may she rest in peace, lived with us for awhile after being flooded out of her home. And oh boy, did she love her tee vee. We didn’t (and still don’t) have a DVR, but Nana watched the tube all hours of the day and night. “Downton Abbey” and “Golden Girls” not so much, but “Law & Order” apparently can be found any time on one cable channel or another, and after awhile, that signature “DUN DUN!” sounder that gets played at scene changes drove me right up the wall.

When she’s not strewing pill bottles and soiled laundry all around the house, “MIL-inda” (Funky’s Mother-In-Law Melinda, get it?) likes to unwind by hopping on the family iMac and giving her retinas a workout on the ol’ Retina display. The Mac OS has a host of accessibility features, including one called Zoom Way the Fuck In (keyboard shortcut: ⌘ + ⌥ + ⇧ + ⌃ + F), which renders screen fonts in billboard sizes. It might behoove Funky to set the blind old biddy with her own user account, which she could customize however she likes without inconveniencing everyone else, but then we wouldn’t be treated to today’s boffola gag.

Evidence of Miranda’s slatternliness extends to every room of the Winkerbean home. It’s enough to make Funky consider converting the half bath in the guestroom to a 3/4 bath with the addition of a shower. He’s pretty resigned about it too, which is surprising; the Funkman strikes me as someone who’s pretty tight with a buck.

bobanero
November 25, 2019 at 8:10 am
Isn’t Holly’s mother roughly the same age as Funky’s father? Why aren’t they just sticking her in Bedside Manor?

A tip of the SoSF pillbox hat to comicbookharriet for her outstanding commentary these last two weeks!

Before the Army made a man out of him, we all know that Cory Winkerbean was a thief, a cheater, a vandal, and generally a smartass. Today we learn that he was also a pillhead and a slob, too wasted or apathetic to even try and hide his addiction from his mom. I’d suggest that Cory inherited his slovenliness from his grandmother Melinda, but I seem to recall (correct me if I’m wrong) that, like half of his Act III contemporaries, Cory’s an adoptee.

That must be one of those ultra hipster coffee shops that adds CBD oil to the ‘special’ brew, because Mindy in panel 3 is baked out of her skull. And the sapphic undertones come back in full force as Ruby leers at Mindy and confesses she wishes that she were young again, and Mindy, grinning, labels her a ‘girl’, promising to make her fantasy reality.

And it is Batiukian in the extreme that Ruby’s protest of her ‘coffee girl’ duties was passive aggressive and petty. If he wanted Ruby to be a real crusader, she would have flat out refused to fulfill the chauvinistic expectations of the men around her. But no, she was miserable, remained miserable, and now wishes she had been born in a different decade because her own was unabated misery.

I’ve read so many compelling interviews this week, interviews with Lily Renee, Valerie (Violet) Barclay, Ramona Fradon, and Marie Severin. You know what these women wanted to talk about? What they got passionate talking about? Art. Writing. Their Work.

They didn’t want to spend hours complaining about how every man in their life was a miserable bastard. We’ve seen one picture of one character Ruby Lith drew. We know more about all the men who ruined her life than the art that was supposedly her passion.

An interesting interview with Fradon started this way.

Bradley: I suppose one of the first questions you get hit with is: Was it hard to be a woman in the comic industry? Did the guys treat you poorly, etc.? But I also know you haven’t had a negative thing to say about that aspect, and that’s awesome, so let’s skip that part, and talk about the work.

You like mysteries. So do we. Please tell us about working on House of Mystery with Joe Orlando. Is there a standout story for you from that period? Also, what other mystery-type books did you get to work with?

Thanks for not asking me that.

As for the mysteries, I enjoyed working with Joe Orlando. He was a great editor. He was more interested in the art work than other editors I had and he taught me a lot, especially about inking. The mysteries were written very melodramatically and I preferred working on them more than the superheroes.

She enjoyed working with a man. A man who was a ‘great editor’ who pushed her to do even better work. Please stop asking her the same tired questions about her presumed persecution. Ask her about her ART. Ask her about her CHARACTERS. Let her know that you care about her contribution because she is a great comics artist in her own right, not because her sex makes her a curiosity.

Bradley: As cool as Metamorpho is himself, I’m a big Sapphire fan. I really think Sapphire Stagg is one of the hottest chicks in comics. Is there some Ramona in Sapphire?

Ramona: Of course Sapphire was me.

Bradley: Just fun to hear you say it.
Another goofy character you worked on was Plastic Man. Was there any key difference, enjoyment, or advantage between working on Metamorpho vs. Plastic Man?

Ramona: Plastic Man was fun in a different way. His stories were satirical and he was a total goof, while Metamorpho was sexy and involved a lot of interaction among the characters. I enjoyed them both but in different ways. 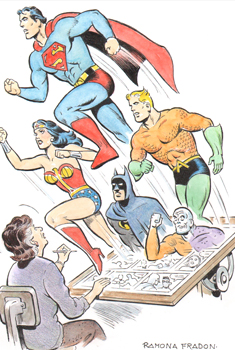