A tip of the SoSF turban to Comic Book Harriet, who never fails to spin enlightening and entertaining gold from Tom Batiuk’s dreary dross. 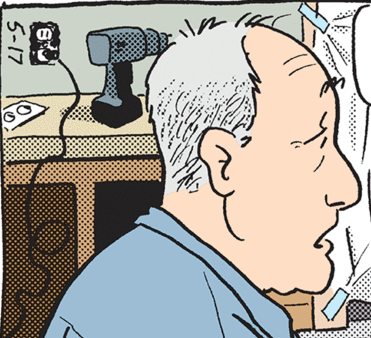 The usually exposition-happy TB cuts us a little slack today: without any kind of setup, we rejoin the interminable Kitchen Reno, already in progress. Maybe “progress” isn’t the right word…Funky and Holly’s kitchen is still a complete shambles. But what a lovingly depicted shambles. Clearly, Tom “Write what you know” Batiuk (or maybe Chuck “Really just the penciler” Ayers) must have experienced a kitchen renovation a couple years ago, and was “inspired” to subject Funky (and us all) to a similar ordeal. I’m surprised the FW blog hasn’t been featuring “reference photos” of a gutted Kartoon Kastle kitchen. Willya look at all the details! Every outlet cover has been removed (I thought the bare outlet in the upper left was emitting sparks, but that’s just today’s date). Tools and extension cords are strewn about, plastic sheeting hangs in the doorway, and the floor is covered with a (poorly taped!) dropcloth.

Oh yay, more obsolete technology for Batiuk to fetishize through one of his characters. Was Funky’s record player or eight track player broken? Crazy Harry will be so sad. And this seems like one of the silliest possible times to be using a Discman. The whole point of the things is that they’re portable. Listening to one when you’re by yourself in a room in your own house seems to defeat the whole purpose. Does Funky somehow own a Discman but not a stereo that can play CDs? This strip is mind-boggling sometimes.

Oh, and apparently there are still several companies that make portable CD players you can buy, at least on Amazon.  They’re not Sony Discmans, but still.  I also have a strong feeling that when Discmans debuted, Batiuk probably loudly proclaimed that his portable tape player was way better.  And knowing him he probably did comic strips about it.

That guy in the first panel sure looks happy. I hope he hasn’t discovered a new addiction to donuts.
Is it just me, or is that sentence in the second sentence super unwieldy? I can’t really think of a better way to phrase it, and it doesn’t really lead into the third panel at all.
Haha, “news that’s unfit to print”, that’s never been done before. I guess “Troller” is supposed to be a play on “Twitter”? Except it doesn’t sound at all the same, and I’m positive Batiuk has already made up a spoof of Twitter.
But yeah, reading the news is stressful and can lead to a relapse into alcoholism. True, but not really great material for a comic strip.

Today’s strip is a bit weird for multiple reasons. It’s odd that Batiuk is highlighting that there’s a pandemic going on, and yet neither character is wearing a mask. And the whole punchline of the pandemic making meetings more crowded seems to be the exact opposite of what the pandemic actually did. Unfunny, uninteresting, and baffling-it’s the Batiuk Way!

Cripes, What a Black Hole!

How bad was the past week of Les strips? Bad enough to make today’s appearance by Mister Kablichnick feel like a refresing palate cleanser. I was ready to add “doughnut of doom” to the Batiuktionary, figuring that the term was coined by TB to set up the “punchline.” But Grandpa Google turned up this April 2019 New York Times article that uses the phrase, as well as the image Jim that is showing the students.

It’s been a pleasure sharing the pain with you lo these last two weeks. Beckoning Chasm steps into the wheelhouse starting Monday!

J.J. O’Malley
February 26, 2021 at 11:43 pm
I can’t believe I’m writing this, but I almost want there to be a complete tour of the new and “improved” Chateau Winkerbean tomorrow, just so our six days of sloughing through (apparently) one very repetitive day-long conversation won’t have totally been in vain.

Hate to spoil it for ya, J.J., but I have a feeling that today’s strip is about as close as we’re gonna get to seeing the actual reno in progress. Throwaway panel 1 is a lovingly detailed rendering of a gutted kitchen, chock full of the kind of details–the orange extension cord, discarded sheetrock and wood, exposed studs and electrical–that have me thinking Batty snapped some reference pix during the real-life reno of his own kitchen that inspired this arc.

Also in panel 1, to the left of the FW text, we see Holly’s profile, which tells us that they’re sitting in a room that’s just off the kitchen. Which makes me wonder how she could forget that the ice cream and everything else has been moved to another location.

Cut It On The Bias

Whaaaaaaaaaaaaaaaaaat?! After a week of setup for this cameo and its single, six word line, Les flubs it in today’s strip? Who could have possibly seen this coming?

At least the narrative has inched along despite wasting 14 panels on reusing the most cliche gag about acting in history. Mr. Director himself, Martin Johns, confirms what we all suspected since we first saw that laughable park bench set being put together… this film has next to no budget. Unless he’s just being dramatic about the tire fire that Les has turned this scene into, in which case we’ve gone no where on this story arc in a week and a half.

Unlike Lisa’s Story, those strips were worked into an actual film, It’s Christmastime Again, Charlie Brown, which I got on videocassette for the price of a tank of gas in my parents’ Mazda at a Shell filling station back in 1993.

And frankly, “Les says things and bothers innocent bystander(s)” is not new ground even within the history of this strip either. Let’s move on.