And here is the Reader’s Digest version of today’s strip: 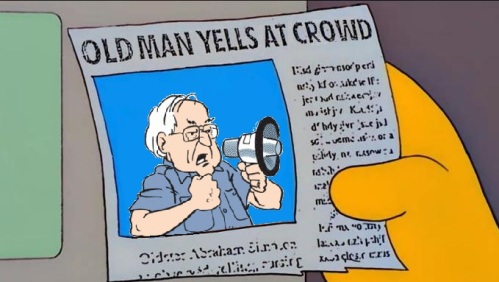 Today’s strip was not available for preview. One can reasonably assume it will involve Lefty continuing to torture the poor folks who agreed to play in this alumni band.

So, without the current strip, let’s take a quick look back at Lefty in late Act II, who had just been named Westview High’s band director. Dinkle tries to get her killed for the sake of a bad pun. He is a monster.

So, question for the group:  Why the quotes around “save” in panel one?  Let’s not beat around the bush, here…had this been a young John, or Pete, we’d be told how these comics were saved, no quotes, from destruction.  Chester, however, has his actions quoted, implying that they weren’t saved at all.  But we see him carefully putting them away in boxes.

It’s exactly what a commentor pointed out here a couple of weeks ago–all of Tom Batiuk’s good characters are impossibly good, and all of his bad characters are impossibly bad, so even though they do the same things, those things must be judged “good” or “bad” on the actor, and not the act.   Chester could save orphans from a burning building, and we’d be told how “naturally, after Chester ‘saved’ the orphans…” he was still a bad guy.

I don’t know what this is called, but “writing” it ain’t.

The Sorrows of Young Chester

So, he stole them!  He’s a terrible thief.  But he saved them from destruction–he’s a saint!

Surely, in Tom Batiuk’s world, Chester’s scheme makes him an awesome hero.  I seem to recall reading something in Batiuk’s blog where he talked about taking comics from somewhere–I think it was a barber shop?–because they weren’t appreciated there anyway.  Chester’s going a step further–he’s saving these books from destruction, not just neglect.

Now, I’m not going to condone Chester’s petty thefts, but the strip is sending mixed messages here.  I know, I know, Chester has to be the bad guy, because he’s not noble, pure (and poor).  He looks down on the people who aren’t like him.  He comic book obsession hasn’t caused him to suffer in any way we’ve seen, not like John or Harry, so he’s just gotta be bad.

But he’s saving Bantom comic books from the flames.  Something no other character here (other than the creator-hated Funky) has ever done.  Not even Les.

He’s using his resources to preserve beloved comic books.  Meaning, it’s actually people like Chester who keep John’s store in business.  It’s certainly not idiots like Chullo and Glasses, who show up to read comics and play video games, but never buy anything.  You’d think John would do his best to woo Chester as a customer, but no, the purity of fandom is never tainted by the coin of commerce.

I’m also thinking that ties into my next comment.  We’ve seen that the drug store has stacks of comics that it can’t sell–meaning, in my world, that these comics aren’t popular.   Yet it is implied that Chester was able to sell these same comics to amass a fortune.

Look.  These comics can’t be simultaneously obscure, neglected masterpieces as well as the storied beacon of a generation.  I strongly suspect Tom Batiuk has a variant of the anti-popular syndrome–if it’s well-known, it’s shunned, while the more obscure something is, the more obviously superior it is (as well as its appreciator…well, that’s only natural, right?).  After all if everyone liked it, you wouldn’t be special for liking it too.  It’s a pretty despicable kind of fandom, but it definitely exists.

Things I Like Dept:  panel one’s a nice perspective shot, and the figures are well-posed.   Good chair drawing too.  Pity this good stuff is wasted on such awful characters.

That’s right, and why do we want them?

I can’t hear you!

That’s right!  Tear the covers off!

And now we know what happened to Cody.  He invented a time machine and went back to a simpler, less stressful, more enjoyable time.  You might say he went “back in the day.”  Let’s hope that as he gets older, he remembers to drive fast enough to hit and kill a teenage Les Moore, who was crossing against the light.

“Once, back in the day, mild-mannered Blonde Bernie Silver, secretly known as Chester the Chiseler, was carefully sweeping the floor.  Suddenly–!”

So, I suppose we’re about to find out why Chester’s such a terrible, terrible person.  Well, so far, he’s actually working at an honest job, which is better than 90% of the cast here, so…ball one, in favor of Chester.

I’m really starting to hate Tom Batiuk’s endless self-promotion, which seems to be getting worse and worse, to the point where it’s getting nauseating–case in point, Chester’s Batom Comics t-shirt.  Completely unneeded, except as a “look at me!” moment.  Good grief, man, try entertaining someone other than yourself for a change.

The art in panel one is pretty dismal, with what look like two of the dreariest Muppets ever trying to deflate themselves.  I do like the statue of Robin in the back, reaching for Superman’s crotch, though I have to wonder–does Batman know about this?!

I suppose he does…after all, he’s standing right there, moaning about “back in the day…”

Speaking of which, anyone remember this?

In other words, he was lying through his teeth.  Yet another wonderful character to root for!