I’m on the edge of my seat with the rest of y’all wondering what fresh hell Sunday’s comic will provide. Check back at midnight EDT!

Legends of the Fall 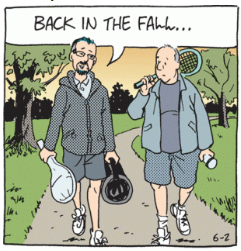 “Back in the fall“?!? No, Les, it was Christmastime, for cryin’ out loud, when your non-bio non-stepson took time off from his “work” (oh, please) to hang out with you. And as far as we know, he appeared at the signing only because you were not home at the Taj Moore-hal when Boy Lisa showed up there unexpectedly. “Legs of the book tour” my ass. You wanna talk about legs? Check out Les’ pins in panel one. It’s a wonder they can support the weight of his body plus two tennis rackets!

Nothing much to like about today’s strip aside from the fact that, after getting smirked at by Les “Two Rackets” Moore for three days running, it’s finally Funky’s turn to rock the ol’ Amazon logo grin.

At least Pluggers usually employs a gentle, joshing point of view regarding aging. Les responds to Funky’s remark with a look of pure contempt. Maybe because he’s being called “an old man” by someone who’s a doppelgänger for his own octogenarian father. I guess some old men were left behind.

Wednesday’s strip was not available for preview.

I mentioned yesterday that I don’t play or know anything about tennis, right? So, as is often the case when trying to grasp a Tom Batiuk punchline, it was necessary to resort to Google to try and understand today’s strip. 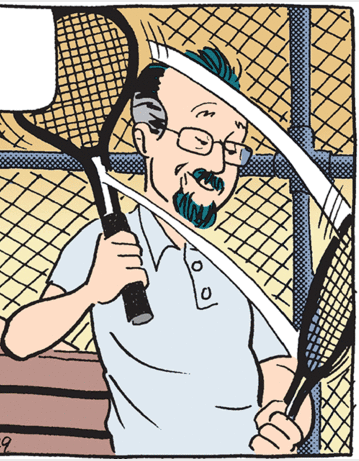 Googling “why two tennis rackets” turned up, among other results, this page titled “Why two racquets?” which suggests you should have “one for your service game and one [slightly heavier] for your receiving game.” I found a 2009 article at the New York Times about a guy who believes “playing tennis with a racket in each hand improves brain function and balance.” While Funky, given his genetics, should be concerned about brain function, that’s probably not what’s going on here. Tennis.com‘s editor states that “players carry multiple racquets, of the same make/model, so that they’ll be prepared in case one’s strings break,” which makes a little more sense.

What doesn’t make sense is Les’ action in panel 1: it looks as if he’s rubber-cemented his two rackets together and now must pry them apart.

Hello there, snarkers, and welcome to Son of Stuck Funky’s 3,000th post! Once again, big ups to Beckoning Chasm, Epicus, and the rest of the author roster, and to all who read and contribute and comment.

When SoSF began, that week’s arc involved Funky and Les closing up Montoni’s New York City location. Today we see the same two old(er) pals playing—well, talking about playing—tennis.  “That tennis lesson I took isn’t helping much…” I think when it comes to tennis, “lesson” needs to be plural before one’s game begins to show improvement. Now, I’m not a sporto, and I know nothing about tennis: I have no idea how using old tennis balls vs. new would affect one’s play. But I do know that decent quality tennis balls cost between four and eight bucks for a can of three; might be worthwhile to invest, if it’s that much of a “problem”. And I know that tennis balls are usually a bright green-yellow, and somewhat larger than that tiny white orb Funky is gingerly holding in panel 3.

Rich Burchett is back behind the Funky Pencil, as you can tell by the dizzying upward perspective in panel 1. Judging from the orangey background, Funky and Les are playing their match either at sunset, or amid a flaming hellscape.

And so here we are at the presumable conclusion of a 5 strip story arc centered on a “friendly” tennis match between Les and Bull played in Westview, Ohio. It ends with one character welcoming the certainty and nearness of death. Of course it does…

Les Moore’s tour of temerity continues in today’s strip. I think we’re seeing why it has been so long since Bull played tennis with Les.

The man is a monster. An individual devoid of any redeeming value. The reason alien invaders will cite for killing every last member of the human race. The image of him smirking, poised to serve, has soured me on the sport of tennis entirely. The revenge fantasies of 90s pop punk bands were kinder to their one-time high school bullies than Les. Donald Trump is appalled by his lack of tact and Bill Laimbeer cannot fathom his level of sportsmanship.

The craziest thing, to me, is that we have known the above to be true for years. We expected this kind of behavior, we know it is coming. It’s terrifying to think about.

Les finally pries open that smirk in today’s strip. Does he continue to live up to his well-earned reputation as the biggest schmuck on the comics page? Boy, does he ever!

This is, perhaps, the perfect test to see if the jerk store called and is running out of you:
Your friend has a panicked expression on his face and is admittedly struggling to breathe, beyond being typically “winded”, what do you do?

– A – Make a joke about his possibly health-threatening condition being an improvement for the environment.
– B – Do pretty much anything else.

Bonus Haiku:
“I don’t know what it
Is… but I just can’t seem to
Exhale completely”

Even when potentially in need of medical attention, Bull puts forth his second haiku in as many panels. This is notable because it is more than the last three years’ worth of writing from Les and Mopey Pete combined.

The second panel
It is um… well, it… oh boy
Photoshop away

Well, what do you know
Bull is a better poet
Than Les the writer