Tag Archives: mouths way too low on the face

Summer actually has appeared in this strip as recently as 7 weeks ago, which is not something you could often say since she graduated high school. Even so, it’s kind of remarkable that Les and Cayla have interacted more over the past few years with a now-Oscar-winning actress than they have with their own children, both of whom (still!) appear to go to Kent State… less than an hour away from where Westview is generally considered to be.

And by “remarkable” I mean 1/4 inch AU from reality. I think I would have found it more relatable and more entertaining had we focused instead on the adventure that must have been Marianne’s efforts to bring an Oscar stuffed in a small drawstring bag through a TSA checkpoint.

Clap on! Clap off!

Marianne does NOT look like someone who is willing to give away her Oscar in the first today’s strip. No, she’s looking at that Oscar the way most characters in this strip look at comic books.

The rest of this is as rote and pat as an Oscar acceptance speech can be, so let’s have some fun with another crowd shot of “famous” faces. Help me fill in the blanks and fix the mistakes where my corrective lenses deceived me.

OK, three weeks until the actual Oscars ceremony, plenty of time to build suspense. Will Marianne beat out Gretchen Gold and Cordelia Rama for best actress? We won’t know for sure until…

The first panel of today’s strip?!

Uh, points for brevity, I guess, though in this case it is most certainly not the soul of wit… or any other word positively associated with writing. In the absence of anticipation as to whether or not Marianne will win the little golden man statuette, we have the ridiculousness of professional actress Marianne (and no stranger to public speaking and media attention) not having any remarks prepared despite having an apparent one-in-three chance of winning. This is compounded by the ridiculousness of her asking advice on accepting an award from a guy whose work outside of Lisa’s Story and Starbuck Jones consisted of Dino Deer, My Dog Pookie, and being incredibly nervous about simply doing a table read (!!!) for the unfinished masterpiece that was Lust For Lisa.

At least Cindy’s shtick is consistent.

Hey SOSFers, thanks for doing my job for me on today’s strip! Very much appreciated.

Now I’ll give Dinkle this, he’s historically been quite honest in his assessment of himself in regards to retirement being hard for him. Harriet, on the other hand, is really the one who should “pick a lane“. She was the one who arranged for him to unretire in the first place.

Oh sweet Sousa, it’s HIM! I guess we all knew his appearance was inevitable after Holly brought up band alumni yesterday, but I think we were all hoping he wouldn’t show up as soon as today’s strip. But now he is involved AND he is tossing around comic book/video game terminology like he‘s DSH or the other guy in this strip named Harry, making this story arc go from insufferably bland to straight up insufferable in three panels flat. And now we know Holly wasn’t the only majorette he routinely maimed…

Holly really shouldn’t be surprised he remembers her, though. After all, he named his shoe brand’s majorette marching boots after her. I guess that means he is being sincere then telling her she was the best majorette he ever had, though I’ll also bet he‘s been keeping her royalty checks from the sale of those boots for the past 29 years too.

I’m not on Dinkle’s side or anything, but I struggle to sympathize with the choir ladies in today’s strip. Those stern looks of disapproval are genuine and understandable, but these ladies have got to stop setting Dinkle up for this miserable gag. This is the third time they’ve walked right into it. Yes, Dinkle is insufferable and arrogant, but they’ve had plenty of time now to learn that asking him if he knows anything about a subject is a sure way to draw out that insufferableness and arrogance. If you don’t like the way he acts when baited, stop baiting him!

At least there’s no blood this time from Dinkle biting his tongue… Well, that’s not really an improvement. For a while there I thought that maybe Dinkle could be put on a path to self-destruction by frequently questioning his credentials.

For Pete’s sake, look how absolutely smug Dinkle is walking into the band room in panel one. Since his retirement, Becky has tried shilling mattresses, books, and selling the turkeys online. But here she is, stuck again in a chilly band room full of cardboard coffins of rapidly thawing poultry corpses. He knew she’d go crawling back to Sam’N’Ella’s finest, just like she always does. There’s nothing the elderly love more than seeing innovation fail.

I don’t know how long Batiuk has been patting his back over his Sam’N’Ella turkey pun. But, the earliest November in our archives shows the bacteria riddled band turkeys stacked to the ceiling.

I hope all of you aren’t tired of Dinkle yet! Because November is DINKLE AWARENESS MONTH, and our glorious leader, TF Hackett, will be making sure you all are aware of Dinkle for the foreseeable future.

But, before I sign off from my shift, I just wanted to take a moment for a little early Thanksgiving sentimentality. This week wasn’t just Donna and Harry’s (early) anniversary, it also marked my third anniversary of guest hosting this blog. I can’t say how much having a warm and inviting place to snark means to me. A place where I can stretch some disused writing muscles to a cozy, appreciative, audience, and even feel okay if I need to slack off on a few posts where the stress of real life or the paucity of the material gives me little to work with.

So I give thanks to TF Hackett and Epicus Doomus, for making this little place chug along, and giving me the opportunity to drive the bus every few months. And thank you everyone who comments, either with praise, or details, or your own hilarious takes on this strange comic universe’s Kafkaesque parody of a Hallmark Channel movie. Remember, your impotent rageposting makes the world a brighter and funnier place.

In the glacially paced Funkiverse, we’ve learned to appreciate anything that passes for actual plot advancement. Linda has decided to retire, and the first one with whom she shares this important news is, naturally, her work husband Les. I’m wondering what Bull’s “maxed out” CTE is going to look like. So far, it’s merely turned him into a passive, mildly dumber version of his already dumb self. He definitely has depression, and his grasp on reality isn’t helped by well-meaning friends who retcon his past failings into Hall of Fame accomplishments. 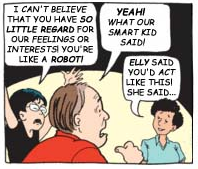 I just had to share a remixed FW strip that appeared a few years ago at the comics blog Snark It Up, Fuzzball, which depicts a much happier outcome for Bushka Family.

The Jerks Who Irk

It’s been said far too many times before.  Here are two clods given a once in a lifetime opportunity for a dream job, and all they can do is moan and bitch, bitch and moan.  The appropriate reaction from Mr. Toothpaste-Tube would be to say, “Okay, guys, we’ve had enough–if you can’t cooperate with us and produce something, if all you can do is smirk and make moronic remarks, we really don’t need you.  So get your stuff and get out.  And remember, you signed NDAs so don’t even think about posting anything online.  Prison hasn’t gotten any nicer, and don’t believe anyone who says a spell inside will build character.”  I’m sure that if Mason Jarr the Actor objected, he’d be told, “Okay, so you don’t want to be part of this franchise and want to go back to made-for-TV weepers.  That can be arranged.”  I’m sure Mason Jarr the Actor would suddenly remember what “professionalism” means.

You’d expect Pete and Darin to be interested in a title like that.  It’s no worse than a Marvel or Lucasfilm title.  It’s actually imaginative.  And, when your main claims to fame are The Amazing Mister Sponge and illustrating a Les Moore comic book, respectively, I don’t think you have the right to criticize the works of others.  Not by a long shot.

Seriously, these characters are infuriating.  Fortunately, Mr. Toothpaste-Tube is doing his voodoo mouth-twich in the last panel, and we can see both Darin and Pete withering to dust right before our eyes.

When a cartoonist is clearly tired of producing work, and would far rather day-dream about an imaginary comic-book company, it’s time for that cartoonist to seriously consider retiring.  Instead, what he does is create two characters–an “artist” and a “writer” so both jobs are represented–and give them the same disdain for work and longing for nostalgia.  I guess in the case of the characters, Bantom Comics is (or was) a real-life publisher, so at least they’re waxing nostalgic about things that actually happened.  Not that I think that’s any better; wasted effort is still wasted effort, no matter the inspiration.

The only thing of interest here is Mr. Toothpaste-Tube.  Really, that guy is just weirding me out.  He looks like Butt-head’s dad.