Aside from Les, Cayla, and their offspring, about the only other folks not seated at Harriet Dinkle’s massive Thanksgiving table were the Atomik Komix Krewe. Maybe it was necessary for them to work through the holiday: after all, AK is  a booming comics publisher, regularly pushing out new titles, operated by a staff of six people with a median age well north of sixty.

It was too much work for yours truly to sit at the computer like Flesh Floppyhead (thanks to snarker Sourbelly for coming up with that moniker!) in today’s strip and look up “gravitational wave theory.” OK: I spent three minutes looking it up, enough time for me to glean that it doesn’t really have to do with the ability of one to “defy gravity.” The letter writer, by the way, can accept a superhero who’s “composed of air…and who needs an airtight suit to encase him,” but must take exception to Doctor Atmos’ also being able to defy gravity. Look, forget about wave theory: according to basic physics, nothing can defy gravity. Except in, say, a comic book.  Jeez, what kind of terrible person goes online to complain about comics not following real life?

Oh sweet Sousa, it’s HIM! I guess we all knew his appearance was inevitable after Holly brought up band alumni yesterday, but I think we were all hoping he wouldn’t show up as soon as today’s strip. But now he is involved AND he is tossing around comic book/video game terminology like he‘s DSH or the other guy in this strip named Harry, making this story arc go from insufferably bland to straight up insufferable in three panels flat. And now we know Holly wasn’t the only majorette he routinely maimed…

Holly really shouldn’t be surprised he remembers her, though. After all, he named his shoe brand’s majorette marching boots after her. I guess that means he is being sincere then telling her she was the best majorette he ever had, though I’ll also bet he‘s been keeping her royalty checks from the sale of those boots for the past 29 years too. 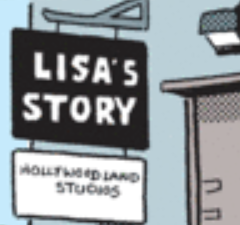 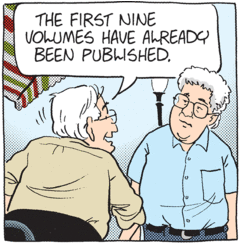