Summer’s Time Done Come and Gone, My Oh My 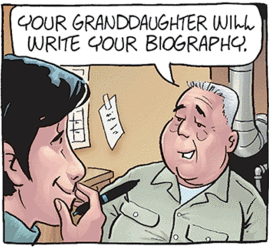 If nothing else, at least today we are rewarded with this howler of a punchline. Give me a friggin’ break.

The comments over the course of the last few weeks have been magnificent, and there’s not a whole lot I can add here. It is indeed disappointing that, whatever the circumstances behind Batiuk retiring his flagship, he chose to go out this way. Instead of even trying to put a neat bow on things, he pulls out this dreary, mysterious “Custodian” to explain how he “gently nudged” events over four decades, to ensure that Summer writes a book that, it turns out, she would have written anyway.

Put this in your book, Summer:

121 responses to “Summer’s Time Done Come and Gone, My Oh My”