Time and again, I promise myself that I will not allow Tom Batiuk to send me down the Google hole. Usually I’m compelled to search for context for a reference he’s made to some obscure (to me) silver age comic book. Sometimes I’ll search Grandpa Google for a particularly odd or stilted expression uttered by a character, to determine whether anyone IRL has said or would say it, before committing it to the Batiuktionary. Why, just last week I spent a good part of my morning querying why anyone would bring two rackets to play tennis. Though it pains me, I feel that it’s my duty to you, the reader, to at least try and comprehend the author’s intentions before proceeding to pee all over his life’s work. 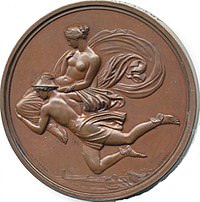 I doubt I’m the only one completely flummoxed by today’s comic. This one sent me first to Google: “…with only hope to assuage him” is such a weirdly constructed phrase that it has to be a literary quotation, right? Not as far as I can tell. Next stop was Wikipedia, to read up on Pandora: not the music streaming and automated music recommendation internet radio service; that’s just part of the gag, see? And hey, props to Batiuk: I learned something. “Pandora’s Box” was actually a jar (not Jarre): sixteenth-century Erasmus of Rotterdam, when he translated the Greek legend of Pandora into Latin, translated pithos, meaning a large storage jar, into the Latin word pyxis, meaning “box”. When naughty Pandora opened that jar and unleashed evil into the world,

Only Hope was left within her unbreakable house, she remained under the lip of the jar, and did not fly away. Before [she could], Pandora replaced the lid of the jar.

The Wiki includes the image you see here of “Hermes carrying Pandora down from Mount Olympus,” which I suppose is where the “downhill” part comes in. Who knows? I’ve already spent too much time thinking about and composing a long-winded post which you probably won’t read before going straight to the comments, and I don’t blame you.

11 responses to “My Myth Take”