Waiting for the Electrician

Epicus Doomus
June 5, 2018 at 11:11 pm
The old “deadpan” style makes the awfulness of the gags slightly more palatable than the self-satisfied smirking does. 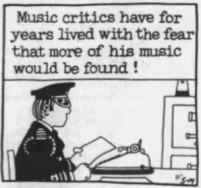 My esteemed colleague Epicus makes a good point. These Claude Barlow gags have been running for decades, long enough for Dinkle to transition from tip! tip! tap! typewriter to word processor to flatscreen display. Whatever humor could be derived from the earliest strips had to do with Dinkle’s serious demeanor as he churned out his lousy musical puns, because Act I Dinkle was such a humorless prick. Contrast this with the kinder, gentler Dinkle of today’s strip: so pleased is he with his latest groaner that I’m surprised he’s not leaning back in his chair, envisioning himself marching around a tiny baseball diamond.

beckoningchasm
June 6, 2018 at 12:54 pm
It should be pointed out, re: [Wednesday’s] vintage strip, that Claude Barlow died about 70 years before the piano was invented.

It’s possible that someone did point that out to TB, and inspired this strip from March 2000:

And while we’re wasting our breath complaining about anachronisms in the Funkiverse: here’s a bonus strip in which we learn that Barlow toured with Franz Lizst (born 184 years after Barlow died) and appeared on a TV show even though TV didn’t exist!

12 responses to “Waiting for the Electrician”