I gleaned a few interesting tidbits from the dialogue today. Les’ statements about having to sell more books and the school being happy with a perpetual super-senior indicates that he is currently paying for some or all of her college. Summer’s scholarship must have run out and/or it was not a full ride. Kent State is a NCAA school and only allows students to compete in four seasons of a sport. Maybe she was a redshirt freshman and wasn’t on the team her first year? But it indicates that this will be her fifth, sixth, or even seventh year of college.

If Les’ is paying for Summer’s graduation, maybe from Lisa’s life insurance, then is Keisha’s college also being paid for? Wouldn’t that be super awkward if Keisha was having to take on a bunch of student loan debt while Summer gets to start clean? But, then again, Keisha seemed like a smart girl. She probably made sure she finished her degree before her athletic scholarship was gone. 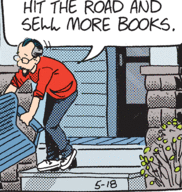 Actually going to commend the artwork today, relatively speaking. The ruler did a lot of the work, but there is good attention to detail for once. In the background at least. Les is drawn as a sightless abomination talking out of his ass, but I’m guessing that’s Ayers subtle caricature of him. And putting up the porch swing in spring not only sets the season, it’s a subtle callback to the strips way back in June 2011 when Cayla and Les confessed their love on it. Batiuk may forget how many kids his characters have, but he seems to always remember that Les has a front porch swing.

Of course…it was TAN not BLUE. But then again, maybe it’s been painted.