The Weed of Crime Bears Bitter…Hey Wait a Minute!

Ah, so finally we know why Chester the Chiseller is considered pure, unadulterated evil.

Why, the blackguard!  How dare he!

If ever there was a “victimless crime,” this sure fits the definition.  John said yesterday that Chester’s pilfering didn’t impact the store to any noticeable degree, so I don’t see any high crimes and misdemeanors here.  And I’d almost be willing to bet that Chester made sure he did a lot of business with Danford, just to “show” his appreciation.

My question is this:  in order to sell comics for “an incredible sum of money,” I would assume that Chester would have to have a lot of them, and they’d be more valuable if they were old.  How many years did he sweep that floor?  If he took ten a month (five to sell, five to his own collection), his yearly take would be sixty, and after ten years he’d have six hundred.  That’s a lot of sweeping.

Secondly, how long does it take for a comic to become valuable?  What would, say, Fantastic Four #1 or Amazing Fantasy #15 be worth ten years later in 1972 (again assuming a ten-year career in floor maintenance)?  “An incredible sum of money”?  Perhaps–but I’m thinking that any Batom comic wouldn’t worth nearly as much, fifty years after publication, except if the bathroom was out of toilet paper. 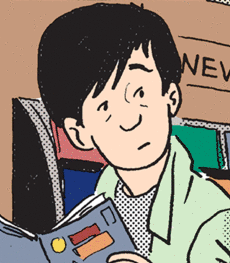 Things I Like Dept:  Pete’s face in panel one is perfect.  “What?  Are you still talking?  I’m trying to read, pal.”  This is probably the only time I’ve liked Pete at all.

And look at Chester, too–happily enjoying ice cream while reading a comic book.  First of all, the book isn’t sealed away, as I would suspect all his books to be, but out to be enjoyed. Given his reaction to Holly’s opening a sealed book, this is something I would not suspect.  I would have thought Tom Batiuk would draw Chester admiring his collection through glass cabinets and pointedly not having fun; maybe the new guy slipped up.

Secondly, he’s going to eat ice cream in close proximity to a comic book.  I have a feeling that John, Harry, Pete or Tom Batiuk would be shrieking if anyone brought ice cream into the Korner.  “Get that out of here!  What if it drips on one of the books!”  And the offender’s face would turn ghostly white.   Oh my God, I almost ruined a comic book!

How rare indeed it is to see someone enjoying himself.  Happily and non-cynically, with not a smirk to be seen.  It’s refreshing.

26 responses to “The Weed of Crime Bears Bitter…Hey Wait a Minute!”