Don’t know why I bothered updating this, it’s just a boring restatement of same boring theme of the entire week. I really wish I could pin Batiuk down and demand his sources for this storyline. I want the biographies, the interviews, heck the Wikipedia articles, he’s read. Because if he’s basing this on Lily Renee, fine, she was a teenage immigrant stuck in an office with strange men who made things uncomfortable for her. But telling this narrative as the prototypical experience does a disservice to the careers of Marie Severin, Toni Blum, and all the other women who managed pleasant working relationships with their editors and coworkers.

Here’s a little view into a sexist, patriarchal, art-jail of EC Comics where Marie Severin was an invisible colorist: harassed, underpaid, and unappreciated.

No. I didn’t want him to commit suicide because … You know what we did to him one time? Because I’m bad like that, I had this disappearing ink. You know in those days we did dopy things. You wore glasses with eyes. And Al Williamson would come in with his artwork like it was his child. I mean he killed himself on it. He was young and enthusiastic. It was wonderful. Great stuff. He brought it in and I was out to get him. So, Al Feldstein said something to me. We had it all planned and I threw it on his shirt and I said, “Don’t you talk to me like that!”

He said, “Are you crazy?!” Everybody wore white shirts in those days, everybody. And I walked out of the room.

And Al is saying, “She’s crazy, she’s lost her mind.” As he’s talking it’s disappearing. And Bill is going, “Ah ha ha ha ha,” and it was still wet. When he looked down it was gone.

So when Williamson came in, they got his work and Al went, “Oops, oh my God!”

Did Al laugh when he realized that his art wasn’t hurt?

Oh yeah, but it took him 10 minutes, ’cause he was ready for an ambulance. ’Cause any of these guys, they really worked. Everybody worked hard on their stuff but Al especially. He was the baby and he brought in his stuff late. Very late. [Laughs.]

Below is a picture Marie drew and colored in 2004 of the EC Comics staff as they were in the 50’s. Look how she drew those chauvisinstic boors who either ignored her or made her life hell. 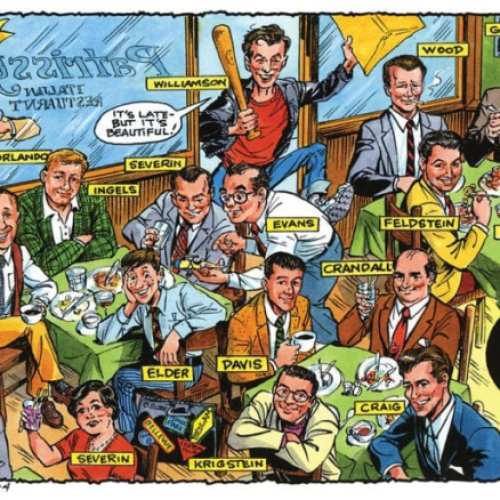