Rhino in Name Only 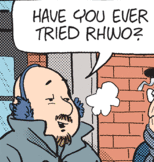 No one, @Banana Jr. 6000, is more appalled than is yours truly. All but the first two days of this month have been taken up with this lame-ass Atomik Komix fantasy.

So everyone here read Chester’s question as “Have you ever tried RHINO?”, right? And then tried to parse this as an acronym for Riding Home With The Owner? RHWO (or RHWTO to be precise). Does he spell out the acronym, or is he asking “Have you ever tried ‘Arrhuwoh‘?” This is another Batty staple: having a character utter a pun or wisecrack that only makes sense in writing.

39 responses to “Rhino in Name Only”