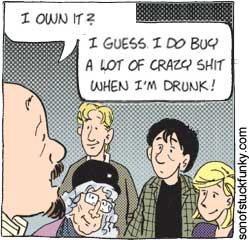 I’m just so sick of that surprised expression that’s been on Chester’s face this whole week. Who the hell goes to the time and expense of buying up copyrights and setting up a “shell corporation” and then forgets all about it? And what was the point of this shell corporation, anyway? Merely to pad out this insipid arc for a couple few more days, I guess.