Barr to Bubu to Jarre 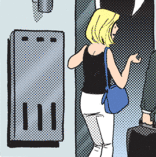 Composer of Wacky Names Tom Batiuk is batting .500 with today’s strip. “Hershey Barr” is a little childish, sounds too much like “Mason Jarre,” and, as a rapper name, could almost be construed as racist (whatever else Batiuk is, he’s not racist). “Bubu Zayla,” after I took a moment to say it out loud and think about it in an “alt-Latina” context, actually made me chuckle, even if the whole vuvuzela thing dates back to the 2010 World Cup. Seems odd that a house with a multi-car garage would be laid out in a manner that requires you to exit the garage after parking in order to get into the house. I also wonder which of the previous owners saw fit to install a tampon vending machine next to the front door.

40 responses to “Barr to Bubu to Jarre”