In Which Cindy Has Lied to Her Teenage Self

“But you’re a star TV news anchor and everything!” teen Cindy exclaims to old, worn-out Cindy in today’s strip. “How can you not be happy?”

Last time I checked, Cindy was a former local news anchor, who had previously been a has-been national anchor, and who was now the news anchor for a semi-professional blog in Los Angeles. So the conversation these two selves had moments ago wasn’t exactly accurate, if you receive my meaning.

Today’s strip poses the existential, time-travel-convoluted question “Am we happy?”—or is that “Are I happy?”

Clearly Cindy will never have read The Antidote: Happiness For People Who Can’t Stand Positive Thinking, which you’d think would be required reading at Westview High, were it not for the ban on happiness of any kind, and probably the school levy failing.

Although… Cindy ought to be happy, given that her female existence has been validated by Mason Jarr, a man, coming into her life.

So… Cindy is going to be the latest character to be revealed—mirabile dictu—to suffer from depression, or self-doubt, or impostor syndrome. Why isn’t Le Chat Bleu there to taunt her?

Beam me up, Crazy!

In today’s strip, the War on Limbs resumes. To wit:

Young Crazy is crazy indeed if he would voluntarily step onto a transporter platform. The car has something like a 0.02% chance of killing you each time it moves you around. The transporter kills the original 100% of the time.

By the way, comic books are “cool.” Working in a comic book store is high-fivin’ “cool”. And so it goes.

After that horror, stepping into the transporter doesn’t seem so bad.

The Eagle has landed, but Funky Winkerbean has not

Ladies and gentlemen, my name isn’t really Oddnoc, and this is Son of Stuck Funky. Snark away!

If he can’t fix it, no one can! In today’s strip, we finally meet Mr. Clean. Oh, sure, we thought his name was Keith, but drawings don’t lie.

To keep the townsfolk from organizing a posse, Funky tapes up a scrawled sign: “The BAND is in rehab.” But I say no, no, no, no, no.

It’s nice to see Funky Winkerbean featuring so prominently in the comic strip that bears his name. He appears as often as Snowball, his car.

Here endeth my stint as your guest snarker. Thanks to TFH and the rest of the SOSF crew for making it easy!

Why not vacuum tubes, Harry?

Harry finally succeeds in finding a CD in today’s strip. As Willy Nelson fills Snowball’s interior with music, Harry comments: “Its nice to see someone else still plays CDs.”

Why is that nice, Harry? You’re old enough to remember vinyl and vacuum tubes, aren’t you? If it’s obsolescence and inconvenience you’re nostalgic for, why not a gramophone, Harry? Why not Edison cylinders, Harry? Why not freaking sheet music, Harry?

Remember when Crazy Harry played air guitar all the time?

In today’s strip, Funky & Harry load the band box into Snowball, whose hatchback has already lost its spring. Why else would DSH John be holding it up in panel 2? Oh, wait, by panel three, it’s holding its own weight. I guess John was trying to give the appearance of helping without actually exerting himself.

That explains a lot about his place of business.

Anyway, today’s comic is about two middle-aged guys reminiscing about high school antics as they prepare to have an antique mechanism repaired. That fits right in with the strip’s mission statement, right? Anyone remember that?

Meet the new creep, same as the old creep 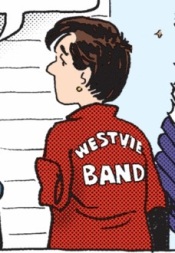 What about a one-armed, mouthless band leader, Harry? What about that? Is that creepy enough for you? What about your “employer”? Are you serious?

Today, DSH John suddenly appears, which is always unsettling. We can be grateful, however, that he has nothing to say, although he does smirk in the final panel.

BanTom favors us once again with unnatural dialog that exists only to introduce a pun. When Stephan Pastis does this in Pearls Before Swine, however, he builds elaborate chains of verbiage—so you know what’s coming, and the fun is in trying to anticipate the pun line.

The structure of today’s joke is much different. (To paraphrase the magnificent Alice from The Vicar of Dibley, and as a reminder, a joke is a story with a humorous climax.) Panel 1: Funky delivers the straight line, which contains the curious phrase “the band box is R.I.P.” Do people use R.I.P. as a synonym for dead in Ohio? If so, I haven’t heard it during my visits there. Anyway, he delivers the straight line: “Either the band box is R.I.P., or I bite the bullet and get it repaired.”

In Panel 2, in a case of premature jocularity, Crazy Harry delivers the punch line: “Biting the bullet would make you a very high-caliber person.”

And aye, here’s the rub: there’s still one more panel to fill. There has to be a second punch line, which I’ll not deign to reproduce here. And that utterly ruins the structure of the joke. Also, there’s smirking.

In today’s strip, we learn that Funky’s inept efforts to maintain the band box at Montoni’s have killed it. That’ll put a damper on the Cinco de Mayo festivities surrounding the pizza special advertised in Montoni’s window. You know, Cinco de Mayo, the world’s most pizza-oriented holiday.

My research into the band box a couple years ago revealed that the real band box at Akron’s Luigi’s has similarly deteriorated.