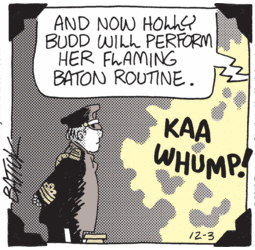 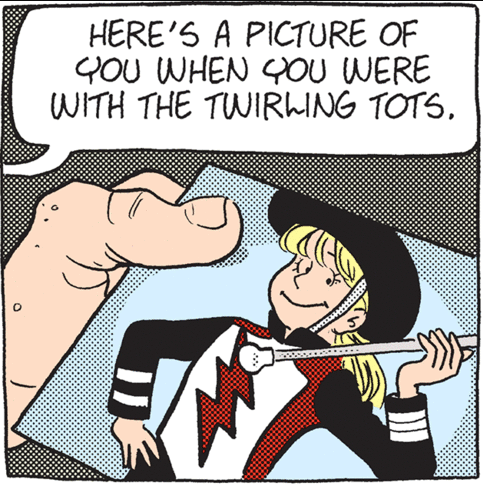 Today’s strip was not available for preview. I would apologize, but I’m not sure I’m sorry I did not have to see it in advance.

Is it simply more of Dinkle’s megalomania? Yeah, probably. Dinkle, of course, has always been a megalomaniac, but his megalomania has gone from cartoonish and over-the-top to appalling and monstrous. Some of that is due to the fact that this strip’s tone has become so self-serious that attempts at humor seem either discordant or simply illustratitive of terrible behavior.

As much as that, though, Dinkle has changed too. In Acts I and II, his constant appearance in full dress uniform with his eyes always hidden under the bill of his cap gave him a cartoonish appearance to match his portrayal as obsessive perfectionist for whom marching bands are the pinnacle of human existence. Since his “retirement”, however, he has taken on the appearance of post-2010 Chevy Chase, and has come to behave much like Chase is said to off-camera.

To visualize, he went from this:

SosfdavidO, coming up short on fire related puns for today’s today’s mope-a-thon. Once again, Tombat leaves the viewer with a confused sense of wondering what the heck they’re supposed to be feeling. It sure ain’t comedy. It’s more akin to Garrison Keillor’s brand of humor but we the reader don’t get the enjoyment (or misery) of hearing Garrison ramble on out-loud.