You know who else is having a dismal season?  A comic strip called Funky Winkerbean.  Of course, this is the normal state of this strip, so this isn’t news to anyone.

Today’s strip illustrates–or rather, doesn’t illustrate–one of the many problems this strip parades like virtues: people talking about something that sounds funny long after the fact, while never showing any of it.  I think showing the basketball team attempting to maneuver around stacks of mattresses could have been an absurd and memorable highlight for this strip.   Instead, it’s just tossed out on its own so that we can have three panels of a bloviating author avatar.

Of course, actually showing that scene would emphasize the main problem:  if the gym was stuffed with mattresses, both teams would be equally handicapped.

Still, it would be fun to watch it unfold.  I also think it could be, um, what’s that word I can never think of when I’m thinking of Funky Winkerbean? 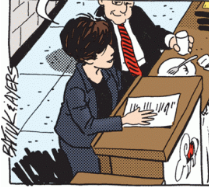 Speaking of art, I like the perspective in panel one, but what in the heck is that behind Becky that looks like a pile of burnt sticks?  Is that supposed to be her shadow?  If so, how come Dinkle gets an ordinary Ben-Day shadow and she gets a scribble?

Maybe it is a pile of burnt sticks and they’re supposed to be awards?  That sounds amusing, so there’s no way that can be it.

15 responses to “That Dismal Season”