I Guess You’re Just What I Needled 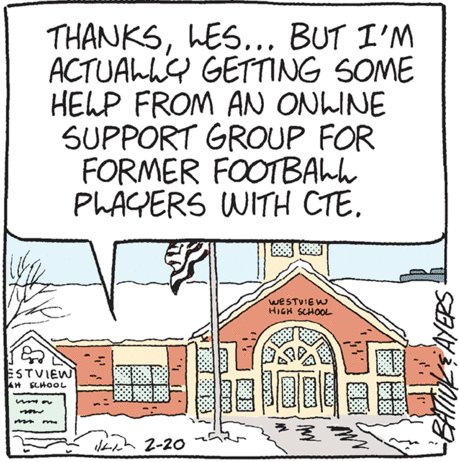 It’s been posited here and elsewhere that the supposed 10-year time gap between events in Funky Winkerbean and Crankshaft means that CS is set in the present, and FW takes place a decade from now…a decade in which medical science has found a way to diagnose chronic traumatic encephalopathy before death. It’s the only way to explain how Bull and Buck are aware of their condition, as well as the existence of such a weirdly specific online support group such as “Former Football Players with CTE” (“Oh, you played hockey? That’s another group.”) Meanwhile, Westview High School is courting controversy by replacing the Stars and Stripes with a “Blue Lives Matter” flag.

20 responses to “I Guess You’re Just What I Needled”