Tag Archives: Lord of the Late

Bored Of The Lame

Snore. LOTL is back but to no avail, as Pete is more focused than ever before and (zzzzzzz). Only in FW could a character merely doing his job (his dream job, no less) instead of aimlessly loafing, daydreaming and goofing off be considered noteworthy. I hope the Lord Of Anything Else visits a certain noted Ohioian comic strip writer soon, although the Lord Of Being Careful What You Wish For is tapping me on the shoulder right now too.

Anyhow, the Lord Of SoSF Snark can kick all their asses without breaking a sweat. Coming on Monday…the return of Comic Book Harriet, who, like the rest of us, is quite anxious to see if this AK arc will ever end.

Tagged as Comics Kingdom stinks, Funky Felt Tip, Lord of the Late, Pete, Stan Lee, waiting for things not worth waiting for

Today’s strip remarkably shows Pete getting a visit from the Lord of the Late, which I think is the first time we’ve seen this particular eldritch dipshit since Pete became screenwriter for Starbuck Jones. I don’t know if we should be displeased that Batiuk has decided to bring this character back or pleased that this wasn’t the start of a “I wonder what things were like back in the ’50s” sequence.

Let’s leave aside the fact, a year or so ago, that the Lord of the Late was revealed to be just an aspect of Pete’s personality.  That alone should banish him from the strip.  (Imagine a monster, long since revealed to be Old Man Carruthers, the Caretaker, returning to menace the Scooby Gang as the same monster.  They’d go right to the mask-pulling without even pausing for a musical number.)

Let’s also leave aside the charming picture of Pete furiously picking his nose in the penultimate panel.  And let’s leave aside what is going on with the hand in panel four (first one on the bottom).

Instead, I have to wonder–has Tom Batiuk ever read a comic book?  Because Super Villain Rule Number One is that you have to bedevil your designated hero at every opportunity.  Saying “I’ll let the internet be mean to him” is just not done.  Imagine the Joker refusing to plot against Batman because he notices the Batmobile parked in a loading zone or something, and is just giddy at the idea of Batman getting a traffic ticket.  I mean, why is the Joker even there if he’s not going to act?

Same with the Lord of the Late.  Why is even here, if his sole purpose is to announce that he’s not going to do anything?   Making Pete “woefully late” is all he does.   (Well, in theory.  In actual fact, Pete always comes up with a remarkably stupid idea to save his career at the last moment.)

Granted, that’s not the worst thing a Funky Winkerbean character can do.  At least it’s not Owen, asking why Humphrey Bogart didn’t use his jet-pack to rescue Ingrid Bergman in that poorly thought-out Casablanca film.  It’s not Holly telling Dick Tracy, “It’s not what you eat, it’s when you eat it.”  And it’s not Les doing, well, anything.

I mean, he’s not really here solely so we can hear about “internuts,” “twitter tots” and “tweet revenge” is he?   Because that’s just sad.  Look, Mr. Batiuk, I know you don’t enjoy criticism–few people do.  But here’s how you get it to stop.  Start actually writing stories, using interesting characters, and–this is key–ask for a new editor, one who will push you to use your strengths rather than sign-off on your work without even reading it.

Yes, I know, that’s not going to happen.  It’s far easier to insult people and get all huffy than it is to change the path of a runaway truck.  So it’ll be all dreck, all the time, on the way to that magical 50th.  The thing is, the critics will be right along for the ride–you can’t shake them by having nothing happen in your strip, because that’s a choice as well.

Well, folks, I can see the sunshine finally appear as my SoSF guest-host stint finally comes to an end (for now).  Please welcome David O as your new dungeon master starting tomorrow, as we ask the musical question, “Whose idea was this?”

Before we announce the winner…here are the runners-up! 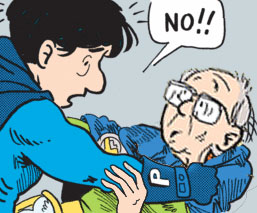 BeckoningChasm
March 22, 2013 at 2:20 am
Let’s have a contest. Who would be the lamest person unmasked as The Lord of The Late? This being Funky Winkerbean, the possibilities are endless. Funky? Frankie? Fred? Montoni? Pizza? Hatred? Chien? Doctor Octopus? 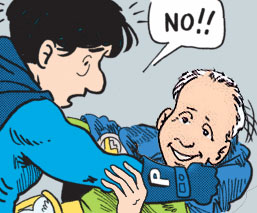 Epicus Doomus
March 22, 2013 at 12:41 am
It’d be equally hilarious if LOTL was Batom himself and it’d probably make more sense than whoever it’ll actually be… 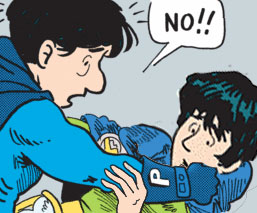 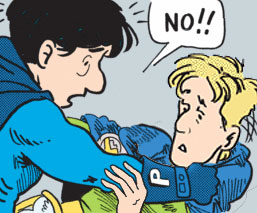 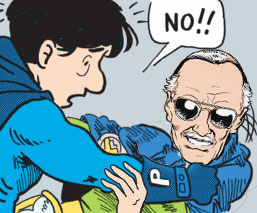 Jimmy
March 22, 2013 at 10:20 am
You’re all wrong. It’s Stan Lee, defending quality comics everywhere from the likes of Pete and Tommy.

$$$Westview Oncologist$$$
March 22, 2013 at 2:28 pm
Surprised nobody has brought up Ming the Merciless as a possibility.

As always, your suggestions are more entertaining…and no less plausible…than the actual denouement, which most of you had to have seen coming, even as you suggested/hoped for other scenarios:

TheDiva
March 22, 2013 at 12:04 am
It’s Pete himself–oops! Didn’t mean to spoil this shocking twist to anybody who hasn’t seen The Empire Strikes Back or a single episode of The Twilight Zone.

sourbelly
March 22, 2013 at 1:09 am
Wait, LOTL is basically just wearing a blue hoodie. Can’t Pete already see his face? And yeah, The Diva, it’s probably Pete staring back at himself. If not, well, whatever.

The good news in all of this is that this concludes this arc (I hope!), and that we’ve seen the last of the Lord of the Late. The bad news, of course, is that Pete just killed off the source of his “best” story ideas, and the ensuing creative drought will force him to move back to Westview, where he’ll spend the rest of his days playing video games with Owen and Alex at Komix Korner.

We spent five days following Flash, Dale, and Pete “across the boundless depths of space” to the Lord of the Late’s lair, only to have the actual confrontation take place sight unseen: when we rejoin the “action” today, Pete’s already got LotL flat on his back, and the dragons “Tempus” and “Fugit” offer no resistance whatsoever. Great pacing.

Let’s start with the assumption that anyone, anywhere even gives a shit about “the nightmares of comic strip artists and writers everywhere.” And Pete: aren’t you a comic book writer? At least in his goofy dreams, the Pro-Crasturbator has found a woman who doesn’t despise him: in fact, she lunges horizontally at Pete and appears to flutter from his neck like a scarf. So pleased with this attention is Pete that the trademark bags under his eye momentarily disappear.

The most fortunate thing is that I’ve been able to do something that I really really love and again it has just worked out perfectly for me. I fell into the right type of strip, the kind of strip that could endure over the years like we’ve been talking about. I didn’t get the job at Marvel because I’d be out of work right now. [Laughs] I would have been pushed aside years ago.

When TB’s right, boy, is he right. No comic book publisher would pay for such silly, self-indulgent, retro crap as this. I guess comic strip syndicates are not as choosy, or at least are willing to let “beloved” strips hang on for years, which is how long this arc seems to be dragging on.

Get ready for a showdown between a Great Depression-era science fiction hero and an ineffectual villain whose evil superpowers nobody can understand. And in the middle of it all is “Pro-Crastinator” Pete, whose superpower seems to be his ability to shape-shift from pencil necked geek, to man with boobs, to today’s Chris Christie-like proportions.

And so, 400 miles from the few friends he has, and unable to find companionship in the big city, Pete succumbs to his curiously outdated, retro fantasy. Flash and Dale have come to enlist the Pro-Crasturbator’s help against the Lord of the Late. Since LotL is known as the nemesis of comics writers on deadline, it’s unclear why Flash Gordon would have a beef with him.

For Cryin' Out Cloud

Oh, wait, it gets even better! The Silver Lining appears from out of nowhere! In a flash of light! Now that’s what I call “writing!” Incredibly lame, puerile, crappy writing. Even the Lord of the Late is appalled.

Comments Off on For Cryin' Out Cloud