Today’s strip is just unpleasant. I mean, that could be said for a lot of Funky Winkerbean strips, including yesterday’s, but rarely is this strip so overtly nasty… and over such a trivial thing too.

Melinda looks to be going hard after Rose Murdoch for Batiukverse mother of the year, though. I know, I know, “Rose is dead,” you’re thinking, “so Melinda should have the title locked up easily.” Yeah, well, Phil Holt and Lisa were allegedly dead too… and there’s still time for them to make a run at mother of the year.

He kinda just showed up two months ago to pile yet more work onto poor suffering Durwood and Mopey Smurf. Well, he’s back and it turns out he’s the director! Who’d have known, huh?  When you’ve got mad comic storytelling skillz like T-Bats, you can have new characters drift in and out without any real introduction at all. That’s why it’s called writing. Damn, we plebes should only hope to be smart enough to be on Tom’s level.

Before we go any further, it’s time to award 1 FREE INTERNET to TheDiva, for having a Ouija board finely tuned to The Ghostly Realm Of Ghastly Cliches.

Well, let’s see if I can go two for two! *presses fingers to temples* I hereby predict that this disruption, instead of stopping the shoot dead while the unauthorized personnel are evacuated before someone gets seriously hurt, will be declared to have improved the scene immensely…

Of course, the director isn’t going to call “cut.” They never do when something unexpected happens on the set, and anyone who thinks otherwise just doesn’t watch enough TV or read enough comics.

Great storytelling demands great artwork, so allow me to bring Mr. Director to the foreground of the first panel so we can see what an awesome draughtsman Tom is. 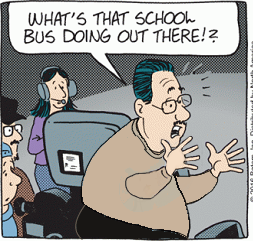