Today! The latest installment of the Funkyverse’s most exciting new game show, brought to you by Crankshaft!

END_OF_DOCUMENT_TOKEN_TO_BE_REPLACED

A Stroke of Luck

This Sunday strip is, I guess, supposed to be ironic. Jessica still doesn’t know the kind of man her father really was. Although Jess had been talking about her John Darling documentary for years at this point.

END_OF_DOCUMENT_TOKEN_TO_BE_REPLACED

Born To Be Mild

Once again, I’d like to sincerely thank all of our fantastic SoSF guest hosts, both past and present. The effort you all put into it didn’t not go unnoticed, no matter how awful the arc you got stuck with might have been. You were all anchors, lynch pins, vital cogs in the daily SoSF machine, and I’m going to miss dealing with all of you.

Sniff. The fact that Harley, which isn’t even his name, easily found work in a public school says plenty about the Westview Board Of Ed’s hiring practices, especially in the 1970s.

“Welcome to WHS, Mr. Gacy. Would you care to tell me a little something about yourself?”

“Terrific! You’re hired! The mop and bucket are over there, and the children are that way!”

Some guy tells me his name is “Harley Davidson” and I’d be all like “yeah, and I’m Lamborghini Ferrari, nice to meet you”. The guy was literally running around “nudging” high school students for the purpose of having them breed. That aspect of this story is really downright creepy when you think about it. “I NEED to make the geek and the nebbish fornicate…but how??”. Shudder.

Sept. 15-27, 2014
Scapegoats Football! The team endure Bull’s haranguing on team picture day. Owen is pressed into service when the first the team mascot and then the ‘Goats’ wide receiver succumb to the flu, and scores a winning Westview touchdown in the unlikeliest of fashions.

Good ol’ Owen. At the time, it seemed highly, highly unlikely, but I’ve actually grown just a little nostalgic about Chullo Boy and his oily sidekick, Cody. I mean hey, at least they weren’t in their nineties, and had discernible personalities. Owen was kind of a dumb, greasy scumbag, and Cody was something of a pitiful pervert, which is a hell of a lot more than I could say about Flash or Phil or Ruby or Batton aka The Geriatric Patrol. It’s kind of hard to believe it was all that long ago. I don’t believe we ever saw Owen and Cody again after graduation, unless they popped up in the background of a Komix Korner arc or something. I wonder what became of them? I assume Owen is employed at a vape shop, while Cody is probably heavily into crypto and meme stocks. And Alex is surely employed at a seedy tattoo shop, somewhere on the edge of town, next to a massage parlor and, well, another vape shop. These are best-case scenarios, of course.

Did you know Linda teaches history at Westview HS? No? Well, then you you’ll learn something from today’s strip. It is, apparently, more than any of Linda’s students can say they’ve learned in several years now.

Yeah, well, she was supposed to be retired by now and she’s only in it for the pension anyways… Plus, the last time I think we saw her actually teach anything she was teaching the “Family Living Course” back when we were still meeting the Owen&Cody generation of kids. 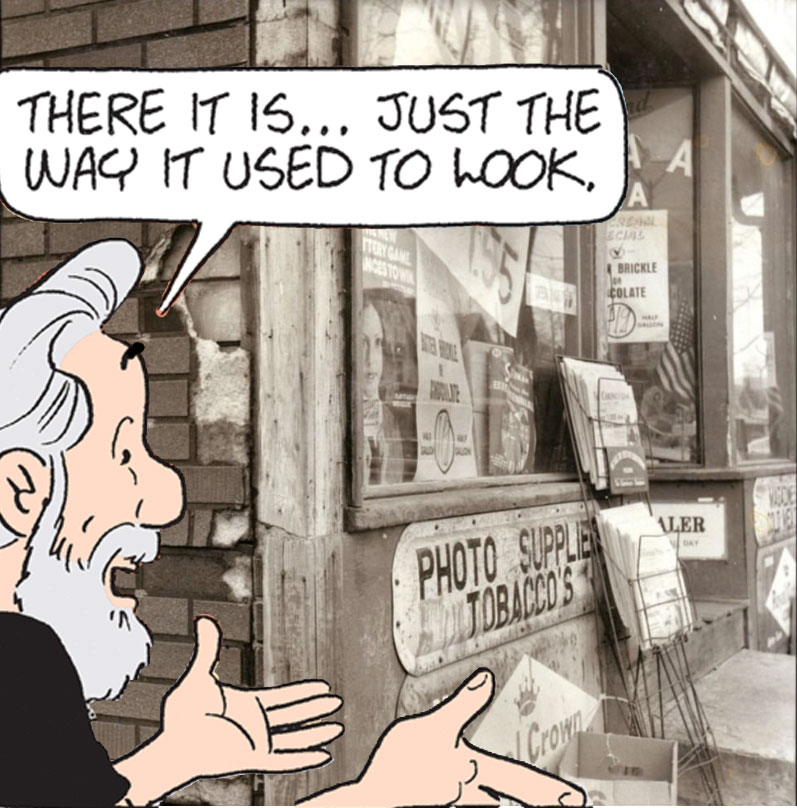 Any time a person or a place in the Funkiverse gets lovingly, weirdly specifically rendered, it sends me down the rabbit hole to investigate. Captain E-Z’s Confectionery, according to an April 15, 2018 story in the Chronicle, stood on Middle Avenue in the Cleveland suburb of Elyria, and was “popular with Elyria High School students for the close proximity it offered to candy, pop and comic books.” On Instagram, I came across an undated image of what appears to be the real place in Ohio. The (poorly taped!) sign in the window advertises milk at $1.55 a gallon, suggesting that this pic dates to circa 1975.

Crazy Harry is excited to get his hands on Amazing Fantasy #15. Last September, a near-mint copy of this comic, which introduced the Amazing Spider Man, sold at auction for a record-setting $3.6 million dollars. Of course, that comic was graded CGC 9.6, and one of only four known copies in such near-mint condition. It’s doubtful that the comic Crazy is drooling over is anywhere near that kind of condition, if it’s been sitting in the spinner rack since it was published in 1962.