OK, which one of you yutzes bet Tom Batiuk that he couldn’t put together another strip about Bernie Silver’s senior pictures? I suppose we have you to thank for today’s strip…

The good news is we can all boot up our Packard Bells and our MS Paints and join Bernie out in Tinseltown, where we’ll be paid handsomely for our rudimentary green screen skills (citation needed). Here’s a blank Bernie to start with:

Now go forth… The possibilities are endless!

Who was that masked shmuck?

Today’s strip is so dense, every single panel has so many things going on…

My last day of the shift and I wind up with Batton Thomas, again (it could be Jff, actually, but nah)?! I know I am no longer the only one who runs into him, as he’s inexplicably turned into a semi-regular, but I still draw his appearances all too often. What a terrible coincidence.

Worse, though, is that it is like these characters know that they just followed a week of Les and are trying to match his insufferableness. They can’t, of course, but what an effort! Hope next week finds us somewhere else, though I can never be too optimistic that a change of scenery will improve things in this strip. The good news is that we’ll have the legendary Comic Book Harriett taking us through it… and through the 50th birthday (!!!) of this comic strip.

Here ya go guys! I hope you like it. Because this fuzzy, disgusting thing is the best joke we’re getting this week outside of our own wonderful comments section.

Actually, truth be told, I laughed when I read this one. I mean, it strains credulity that this girl is only now noticing that something she’s putting in her mouth several times a week looks like a fried caterpillar. But I still laughed. The joke stuck the landing for me, even if the routine leading up to it was as thrilling and challenging as Simone Biles sliding directly across the balance beam on her belly.

But I just don’t care. I’m so worn down by the bad pranks this week, the non-punchlines. This followed a tried and true humor formula: set-up, surprise, and realization. The set up is a filthy reed, the surprise is that Dinkle doesn’t just tell her to toss it, the realization is that making a sarcastic comment about science projects is totally in character for him.

The slimmest weakest of jokes that I can’t bring myself mock. Maybe I’m feeling extra charitable since it’s the beginning of Lent. And as we read in Matthew 12:20 “A bruised reed shall he not break, and smoking flax shall he not quench, till he send forth judgment unto victory.”

If he won’t crush the bruised reed, who am I to quash the moldy one?

PS: Thanks to everyone who liked my story yesterday! It’s nice to know that when Batiuk gives me nothing you guys are okay with random tangents and personal anecdotes.

A Taste of Ohioana

Quick comment on today’s strip. If this exchange didn’t end with hoodie boy getting a one way trip down to the Principal’s office, then Dinkle’s a pushover. The kid is grossly late to class AND tries to prank Dinkle anyway. With a weird, spur of the moment, nonsense prank. Everyone else seems to have had days to plan all their equipment swapping, but hoodie-boy wanders up late, sees a sub, and immediately drops his trombone right outside the door.

I, and TFH, and perhaps some of the rest of you, took some time this evening to watch The 2021 Ohioana Book Festival 15th Anniversary Poster Reveal via eventbrite zoom meeting, though I was about 20 minutes late getting in. The nice man hosting the thing seemed absolutely flabbergasted that someone was watching from New Jersey and mentioned it several times. And every time I gave a little grin and thought, “That’s our Hackett.”

I took some notes during the panel. So here are the juiciest tidbits. Please, anyone else who watched, give your reports as well!

Tom has had cataract surgery, and talked about being terrified of people slicing his eyes open.

He has some pandemic related strips coming next month, but admitted that doing everything a year out had handicapped his ability to write about Covid. He made it sound like he had realized that it was not a case of ‘better late than never.’ And it sounded like he wasn’t sure about starting a whole pandemicverse a year late.

To come up with the name for Funky Winkerbean, he had kids in his art class write down a bunch of silly names, and then he and his wife picked out the first and last name from the list. He seemed both bemused and rueful about it.

He admitted that Les is the character most like himself. Though he said he puts a bit of himself in every character, (IMO, this is the reason why they’re all so samey wamey.)

He said that before the pandemic he and Ayers would meet at Luigi’s every two weeks to work on the strip.

He claims that the time jumps were to keep his main characters closer in age to himself so he could draw on his own experiences for inspiration. (This is probably why everyone in this strip, from 35 to 95, all act the same age.) He also claims that he didn’t time jump Crankshaft because Cranky wouldn’t have ‘survived’ it. I guess forgetting that Cranky is still languishing in Bedside Manor in Funky.

He got the okay to write Lilian getting an Ohioana Book Festival award. So expect that some time in 2023.

And, most pertinent for our blog, Tom says that cartoonists don’t really retire, they collapse over their drawing boards. He said he feels like he is only now getting good, and doesn’t see himself quitting any time soon. Sorry to anyone holding out for a joint 50 year anniversary and retirement celebration.

Congratulations to Stephanie Banch who got the autographed book! Sounds like the host knew her, and said she was local, so I don’t think she’s a Stuckfunkian. 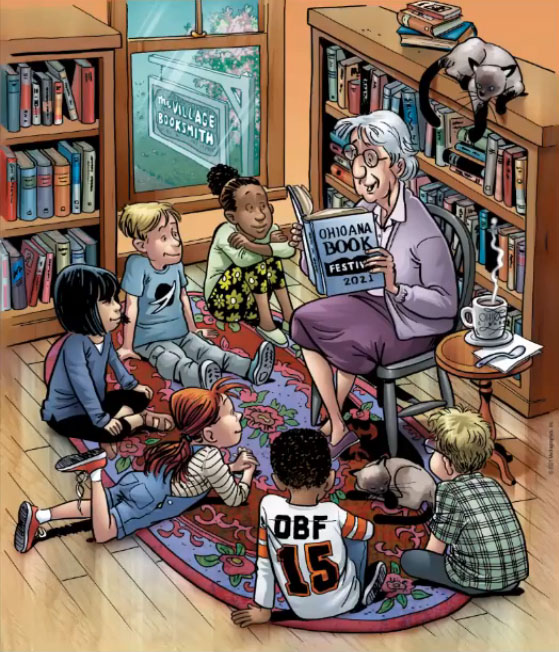 The poster Batiuk created was cute. Lillian reading to a group of achingly diverse children inside her walk-up bookstore. No complaints there. Tom was genial, and answered questions by giving interesting details without going on and on and on about himself. He never talked over the panel host, and actually refrained from correcting him several times. It was nice to watch and remember that, as much as we rib on him, he is fundamentally a decent guy. A little out of touch, a lot absorbed in his own world, kinda preachy and kinda myopic. But a decent guy who does care about other people. I’d rather be stuck on a lifeboat with him than, say, Quentin Tarantino. A great artist can be an insufferable man. And a good man can create absolutely insufferable ‘art’.

As Alike as Two Bothers.

Only now, at the end of the week, do we get a name for our little future Motzart. Robbie even has a brother. A brother in Mopey Pete cosplay.

I wonder if Alex and Robbie are intended to become recurring characters? I mean, regardless of intent, we probably will never see them again. Because even when Batiuk seems like he’s carefully introducing another actor into this slice of life drama, he invariably forgets about them. But it would be interesting if Batiuk figures piano lessons are a good way to milk the remaining Dinkle market?

As for the art, Dinkle’s huge flesh-toned couch is hideous. The little specks on it give the appearance that the furniture has been molded from sand.

But Dinkle’s face in panel 3 makes this whole week worthwhile. The man is scrumptiously morose; hunched over, tired , his lips pursed into a thin line as he tastes the bitter defeat coating his tongue. Never has disdain looked so exhausting. When Ayers delivers, he delivers, and he always puts that effort into envisaging misery.