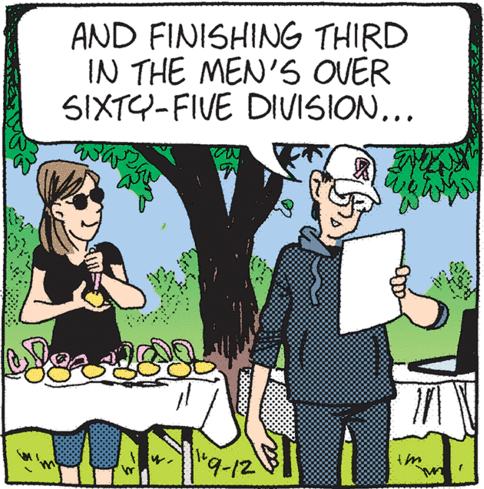 [I]n 2008 [Tom Batiuk] was named a Pulitzer Prize finalist. Only three other newspaper strip creators have achieved this distinction in the award’s 100-year history: Garry Trudeau (Doonesbury), Berkeley Breathed (Bloom County) and Lynn Johnston (For Better or For Worse). Pulitzer judges cited Batiuk’s controversial story line in which his Lisa character battles cancer – a subject not typically covered in the funny pages.

“That sort of validated my career for me because there are only four … Trudeau, Breathed, Johnston … and Funky,” Batiuk says with a smile. “I’ll take that company. That’s not bad.”

From the Interviews page at funkywinkerbean.com 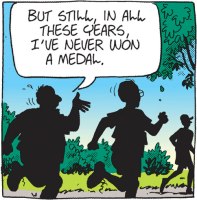 Today’s strip…Who wouldn’t admire a guy who creates three hugely successful (in their day) daily comic strips? The main difference between Tom Batiuk and two of those other three famous cartoonists is that Trudeau and Breathed won their Prizes. Now, being a Pulitzer finalist is nothing to sneeze at, but this does put Batiuk in the lower percentile, alongside Johnston, creator of the only long-running, “serious” comic that engenders even stronger love/hate among its faithful readers.

Not having that Pulitzer on his shelf alongside his Flash maquette has to sting a little, for a storyteller who likens himself to Charles Schulz and Woody Allen. Despite the considerable success and fame that Batiuk’s earned over nearly a half century, he’s still “never won a medal.”

It Keeps You Running

Jeez, that’s quite a list of ailments. Can you imagine what kind of shape Funky would be in if he didn’t exercise regularly?