Okay, so, I actually found today’s punchline pretty funny. It’s wordplay that actually works–referencing the “net” in both the virtual and real worlds.

Which is why I don’t think Tom Batiuk came up with this one. It’s too clever by half. I think this is yet another clever witticism he overheard and thought, “Well, I’ll just steal that.”

Admittedly, it would have been far more effective as a daily three or four-panel strip, with all the Dinkle Worship in the opening panels stripped away, but of course Batiuk has to hype Dinkle’s Rose Bowl appearance. Because of course he has to. He HAS to. There’s nothing else left.

And honestly, I’ve never been happier to type the following words: that’s it from me, folks, my two week stint is over and done, and I am going to collapse into a comfortable chair and watch movies where band directors get horribly disembowled and have to watch as their still-beating hearts are forced into their faces.

I’m not sure there are such movies, but I’m working on one. Be patient.

And as for pity, please put in a big order for Epicus Doomus, whose time in the chair has at last approached. I can already hear the lamentations, which is my cue for buggin’ out of here. Happy trails! 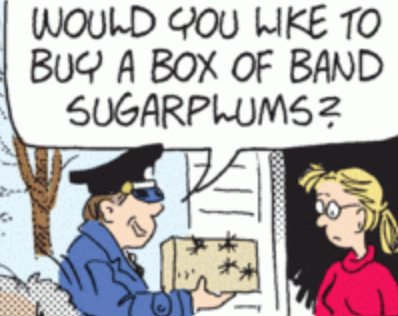 I’m pretty sure a sales fundraiser in which you wind up with a garage full of unsold merch is kind of a bust, no? What exactly is Classic Dinkle’s plan here in panel 1? Even if a polar vortex were to descend on Westview tonight, and linger through Christmas and New Year’s, no poultry (especially organic) would still remain edible. Those “Sam ‘n’ Ella’s” turkeys would soon be living up to their name. If “next year” means “next Thanksgiving,” then the premise becomes even more absurd.

Oh goodie! Dinkle has snuck back into the high school band room to make sure his replacement is doing her job correctly. Didn’t want another repeat of the Band Mattresses door to door fiasco. Nosiree! It’s a frozen avian holocaust year after year from now on, just as our founding fathers intended.

You think Batiuk remembers that he taught Dinkle all about the joys of Indigogo back when he was taking the Bedside Manorisms to Memphis? Of course this is BANDiegogo, some kind of MLM nonsense which probably takes a nice slice out of the gross income from the fundraiser.

Also, has the band room always been teal? Such a weird color for the walls of a school. Blues and greens are typically calming colors, low energy, and the last thing Becky needs from her slack-jawed horn jockeys is less energy.

What is written on the dry erase board in the background? Some kind of manifesto? Probably it was supposed to be the lines from music staff, less the clefs and braces. But the way it’s drawn makes it look like someone’s been transcribing the Declaration of Independence long-hand.

A weird mix of detail and sloppiness in the art today, all over. We have Becky’s omnipresent folded and pinned sleeve, and the tiny music note on the coffee cup of the piano. Then we have a computer’s keyboard in panel three just drenched in teal, and the terrifying scribble of Becky in panel one looking like a meerkat in a wig.

Who is down for a week of Dinkle on autopilot?

In today’s strip, we’re celebrating a major holiday with nary a Les in sight. Neither is there a mention of book tours, ghostly wives, pizza or marching bands. We even get to see Skyler in a somewhat closer view today and the kid doesn’t look bad.

Let’s be thankful for everything we have today, including a FW strip that doesn’t make every bone in my snark body ache.

Dolt with a Poult

Westview is truly a town without pity, as Owen finds no takers for the thawed and bleeding bird he’s schlepping from door to door. As a parent, I’ve been around my share of fundraisers. People tend to be inclined either to give, as long as it’s for a good cause; or not, in which case they simply refuse to answer the door. The folks in Westview, though, insist on asking pointed questions of the seller, before finally declining to buy. And forget about how that turkey was raised, ma’am: its thawed carcass has been conveyed through the streets of town for the last three days tucked ‘neath the arm of a hippie. You do not want that turkey.

Charles
November 19, 2012 at 7:40 pm
Perhaps if Becky is looking for potential improvements in her program and its acceptance in the community, she could advise her students who are soliciting door-to-door to clean themselves up a little bit when they’re interrupting people to ask for money…Owen looks so shabby in this strip that I’d almost think he’s homeless and he found the turkey after it fell off the truck and is now trying to sell it for glue-huffing money.

If only those band turkeys could sell themselves, because between Owen’s shabby appearance, complete lack of manners and salesmanship, not to mention his ignorance of basic food safety guidelines, he’s sure as hell not going to sell any. Certainly not to this guy, who buys only band candy, not turkeys, and only from quirky redheads.

Owenvember continues today: the chullo’d one has been featured in all but four strips so far this month. And yes, folks, Owen is clearly stupid, and/or stoned, but give him a little credit: the woman’s question is pointless (and awkwardly constructed). Why, he’s selling band turkeys to raise money for…the…band.

(Ahwatukee joe’s comment from last year’s turkey sale arc was so deliciously snarky I just had to bring it back.) At least this year Becky is smiling at potential customers rather than threatening them.

Comments Off on Turkey Talk