I Sold Snacks So I Can Buy Snacks

You know you’re reading quality comedy/ground-breaking genre convention busting high Art and Literature when you’re getting an “airplane food is expensive” joke. I do think it’s a little weird that Dinkle went around raising funds from people so he could fly out to California and be honored. I also don’t really get how it’s band candy if someone not in the band is selling it, but whatever.
I do find the entire premise of today’s strip, “I told people I needed X amount of money to fly out here but kept begging people for money long after I reached X” to be pretty revealing. That seems bad, and not something that one of the heroes of your strip should be doing? And I don’t really know what he means by “let on”. Is he just saying that he lied to his wife about how much he sold, and how much money he has? Which seems pretty awful, actually. Or did he lie to the fundraising company and not report some of his sales, by like claiming a box went missing or arrived damaged or something? Setting up the extremely, extremely tired “airline food is expensive” gag that got old decades ago shouldn’t be this confusing.

Today’s strip marks the third straight day that Dinkle is doing his eyes-closed, head tilted back, mouth-agape, peacocking thing… which I think we can all agree is seven days too many. Hopefully we can also all agree that the poetic tire fire that is “I believe this is the first time a man’s crew-neck undershirt has been seen in the choir loft!” is a sentence that is just too perfectly execrable to exist. Yet it does exist.

Yes, we have here a call back here to Dinkle’s May 2017 trip to Belgium, where he was showered with unearned praise, given this unbearably punny-named medal, and stood in front of TB’s uncredited tracing of the legendary Hergé’s work. I’m not wordly enough to know if the Belgians hate us, but I can’t blame them if they do…

Having failed using the direct approach, then humor, Dinkle must resort to his ethical pitch, extolling the green and humane practices of Sam and Ella’s Poultry Co. None of that concerns Roseanne here; someone in the household needs to avoid gluten. As someone who’s blessedly free from such dietary restrictions, I thought Purple Lady’s question was a little weird, but in fact, basting solutions injected during processing sometimes contain gluten. Dinkle manages another, less-witty-than-yesterday‘s riposte, and that confident smile, but beneath the shiny patent visor of that military, his eyes narrow with resentment, and for a fleeting moment he allows himself to imagine himself clobbering this glutenist slattern senseless with the thawing gobbler he’s been schlepping from door to door all week. 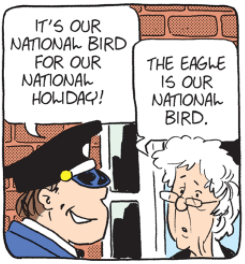