Don’t sleep in the subway, Holly

The day of the big alumni band Holly and Melinda Budd vanity performance has arrived in today’s strip, and the nastiness continues. No, I’m not talking about the weather, though most of us are aware that monsoon rains during band performances are quite possibly the longest still-running gag in this strip (predating even Garfield and lasagna/Mondays, though far far less accessible).

Good crowd on hand, considering the weather, probably the biggest since Bull retired. Whoever replaced him must be doing a good job, crowds were pretty thin when Bull’s teams were struggling.

Sorry, scratch that last paragraph. This is Funky Winkerbean, so I’m sure the crowd is really here to see Holly…

Today’s strip takes us back in time to Sunday, I think. Yep, TB is repeating himself all of two days later… eh, he’s done worse.

Well, not much worse, because Buck hitting on Linda (and insulting the entire canine species) is some of squickiest squick we’ve seen TB hatch in a good long while. How else are we supposed to read “a little attention and a job to do”? This is not cute or endearing, it’s gross. Buck looking kinda like Dennis Hastert does the strip no favors either. Just awful all the way around.

It’s all the Streets you crossed not so long ago

As usual, Sunday’s exertion was not available for preview.  Perhaps it’ll be another semi-pleasant interlude with Funky and Holly, though since they got their own…”story” last week, Batiuk might feel we’re sick of them.  And he’d be right!  Of course, we’re sick of all of his characters, but no matter.

Maybe it will be a bunch of pictures of houses or trees or something, with no characters.  That would be the best Sunday strip ever!

Hey, remember when this story arc was about Bull?
Today’s strip sure doesn’t.

Look, I’m just going to gloss over the fact that Dinkle was actually introduced well over a year into this strip’s existence and just give TB credit for remembering that Funky Winkerbean itself is 47 (and a half) years old… And with that out of the way I’ll go right into wondering what the heck this has to do with Bull, his condition, his life, or anything. I guess if you twist your neck 117 degrees and squint until you experience sharp pain in your temples it appears the notoriously egotistical Dinkle (or is that Buck?) is paying Bull a compliment by saying they were equals despite his long and incessant history of considering all things inferior to himself and his marching band. But really this is just TB repackaging his biggest hit.

Dinkle is the only thing about this strip that has ever moved merchandise. His “football fields are for band practice!” bit covers books and t-shirts, and even serves as his character’s introductory line in the stage play Funky Winkerbean’s Homecoming. Dinkle’s shtick has sold band posters (“Dinkle wants your horn to twinkle”) and shoes, and no less than 9 Dinkle-specific collections of FW strips have been published! No, seriously, there have been 4 Lisa books and 9 Dinkle books.

This is nothing more than TB pushing his most-recognized character/cash cow into a story the New York Times inexplicably gave him ink for. Ugh!

Yes Tom. The Scapegoats used to be abysmal, Dinkle used to be zany and Holly used to explode a lot. Hearing the now-elderly characters reminiscing about Act I sure brings back memories, memories I’ve already forgotten. Buck, who most likely doesn’t have another friend in the world, suddenly decides to start razzing a clearly insulted Bull all for the sake of perpetuating Bull’s endless karmic comeuppance. Simply hilarious. I certainly hope this isn’t leading toward an entire week of “boy our team sure did used to suck” gags but sadly it appears to be inevitable now.

Today’s strip serves no purpose whatsoever aside from moving us one day closer to the end of this “story” arc, and to Funky’s 50th anniversary, and to Tom Batiuk’s retirement. Buck’s inane question receives an inane answer from Bull, and everyone smirks. I just can’t get over the fact that had Buck not invited the Bushkas, Bull would be sitting unawares in his basement instead of in the nosebleed seats as his decades-old rushing record is challenged.

As is customary, Sunday’s strip was not available for preview.  They’re always a surprise, but rarely a good surprise, something you’d actually enjoy reading.  Here are some possibilities I’ve come up with; feel free to add your own guesses in the comments.

First, we might continue with Skyler and his g’rents, though that seems to be pretty played out.  Now, never underestimate this cartoonist for stretching something past its sell-by date, but I can’t really see where he could go with this to “make a greater point,” so we’ve probably seen the last of Dullard & Co for the nonce.

Second possibility is we might re-visit the premise from a week or so ago, and pick up how Chester, the wealthy comics collector wants to get in touch with the comic book writer Peeved Radish.

Third, Funky and Les jogging.  I mean, we haven’t seen that in pretty much forever!  Not that I miss it or anything, but the cosmos feels misaligned.

Fourth, we might find out what happened to Becky’s mom.  –ha ha, just kidding.  That boat’s been scuttled for, what, five years now?  No, the real fourth would be some sideways kids’ book that Ann found in her Dullard shrine, something that would inspire some wry remark about how things were better Back Then.

The fifth and final guess I’m going to add is that we’ll get something completely untied to anything from the last six months.

Anyway, we’ll all find out in a little less than a couple of hours.  Wow!–it’s just like Christmas Eve, right?  Only this is an eve where one measures not the delights that may come once morning breaks, but the various disappointments one is certain to encounter when one reaches the bottom of the stairs, beholds the menacing tree, and hopes that the bigger boxes are not addressed to oneself.

But, well, despite the paragraph above (sorry, folks, I’ve been a guest host for quite a long time, and it does leave a mark), there is one thing certain:  no matter the subject, the characters, the dialogue or the story–it will be dull beyond bearing. 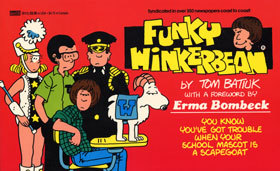 I like the “I” on the front of Bull’s jacket, like the artist just couldn’t be bothered to draw a proper half a “W”. Nicely done there, new guy. What a totally pointless waste of time this piece of garbage was, it was pretty much the same thing as the first Buck arc except even less eventful. At least that one involved thinking and walking. I don’t get what he’s trying to “do” with Bull at all. He gave him a debilitating brain condition in order to force him into an early retirement (Bull is the same age as the rest of the Act I gang, remember) but all he’s done since then is sit around remembering things, which is kind of at odds with the whole point of it.

Earlier in Act III he did an arc about Funky having to put his Alzheimer’s-afflicted father in a nursing home, which led to all sorts of hilarious ramifications, but now Morty is a goofy peppy old coot, improbably enough. Lisa took a hundred years to finally agonizingly die from cancer, then she was hanging around in Les’ car like a month later. Now he’s doing an arc about Bull suffering from brain damage, yet his memory appears to be sharper than ever. There’s a definite pattern of sorts here, one I’d prefer not to analyze very deeply at the moment.