Putting the “die” in dilate

Let us all sincerely hope that today’s strip is the end of “Funky terrorizes the optometrist’s office with his shmuckery.” Oh please please please! I ran out of things to say about it on Tuesday and since then I’ve been filling space with a Droopy photoshop done in Microsoft Paint, obscure 90s punk rock references, and my own experiences at the ophthalmologist. Today, I very nearly wrote 3-4 sentences in this post about what my cat was doing right now, but I’ve taken up too much of you all’s valuable time already. Well, at least I finally thought of something to say about this strip…

Speaking of drops, I’m thinking this country’s newspapers should do just that to a couple of comic strips.

In The Hot Seat.

Link to today’s strip whenever it appears

Comic Book Harriet reporting from the scene of the missing previews. Literally sweating bullets over trying to come up with something that hasn’t been said already by the hordes of commenters, or, as Batiuk likes to call us, ‘Beady-Eyed Nitpickers’.

Seeing a bunch of fresh names in the comments section lately brings a smile to my heart. Hate reading crappy comics is one of life’s greatest pleasures, like music, or fine wine, meant to be shared with like-minded connoisseurs. I don’t know if you people are coming back to watch the world burn, or have just found the place, but the you’re stoking the fire with some pretty hot fuel for thought.

I hope everyone will give SpacemanSpiff85 a massive round of internet points for putting up with almost an entire shift of no previews. He was able to transmogrify something out of nothing, which is the exact opposite of what Tom usually accomplishes. 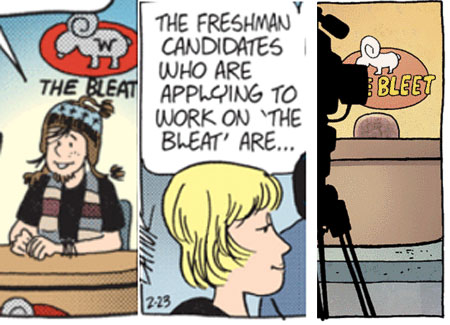 …starts today, as Westview High School’s CCTV news program announces Bull’s retirement to the student body. I don’t know what to call it anymore, though, because apparently either Tom or his Sunday Artist Intern is spelling  the title “The Bleet” nowadays. So, what do you think? Is T-Bats slipping in mistakes like this intentionally to screw around with the snark community, or is he just going a little soft in the noggin?

Since we’re talking about The Bleat/Bleet, say hello to Bernie Silver who seems to have inherited the anchor’s chair from Owen. And since he reports that the official retirement sendoff will be on Friday, we can probably expect the entirety of next week to depict =- or at least talk about – said ceremony.

So, we’ve got Bull’s retirement, a new anchor, and a stupid typo. Other than that, this is pretty much your typical mediocre Sunday throw-away, just like last week with Funky’s leafy hairline. I can’t help thinking, though, that Tom is setting Bull up for a fall. Look at Les in panel three. That filthy, squint-eyed, lifted-eyebrow smirk. He knows something, that smug fuccboi. I’m starting to hate Dick Facey as much as Epicus Doomus does.

So, Sunday’s strip is about collecting permission slips for a field trip.

Then Monday, the field trip’s over and Wedgeman is missing.

Now it’s Tuesday, and the bus is stuck in traffic caused by (what else) the Starbuck Jones filming.

What the hell way is this to tell a story? What happened to Wedgie? Why have we been subjected to months of Starbuck Jones Birth Of A Movie agony and not be shown anything about the filming? This is like trying to read Crisis On Infinite Earths after Mom found our comics under our bed and threw most of them away OH SNAP DID I JUST MAKE A COMIC BOOK REFERENCE

So now the bus is heading down a “short cut” which we all know is just going to turn out to be a bad decision because of course it is and Batiuk hasn’t had an original idea since he wasted, like, a decade slowly killing off a main character in a failed bid for a Pulitzer.